The coral atoll is built on the upper, western part of the flat top of a volcanic seamount on the north east part of the Brazilian continental margin. The seamount rises to a depth of 30 to 15 metres (98 to 49 ft) below the surface. The distance from the reef to the edge of the top of the seamount is about 1 kilometre (0.62 mi) to the west, 5 kilometres (3.1 mi) to the north west and 12 kilometres (7.5 mi) to the east.[3]
The sediment in the lagoon and surrounding the atoll is mostly coarse sand, much of which originates from the corals and mollusc shells.
2021/02/21
Update
azerty 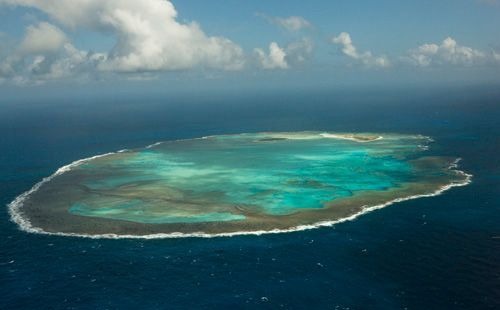 84nm
89°
It is a natural anchorage place, just off the breakwater, which provides protection for the dinghy when landing. However, this anchorage is reported to be rolly. In the winter months (July) the seas here are generally calm.
A stone pier was built for tieing up small ships. Bigger ...
12 Jan 16
Joëlle

130nm
221°
sandy point, about 55m high, with vegetation on its summit. It is closest to the continent of Africa. It also marks the separation of French Guiana (where the coast is low and swampy) and the State of Rio Grande do Norte that offers to S, a massive coast with many coves and bays.

141nm
216°
The port of Natal is situated at the mouth of the Rio Pontengi. The river flows into the sea through an opening in the barrier reef. The barrier reef forms a natural breakwater for the port.
The prevailing winds most of the year are from the ENE to SE.Formalities can be carried ...
13 Jan 16
Joëlle