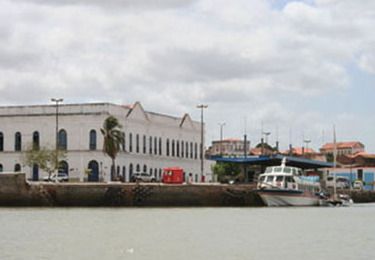 The port of Sao Luishas silted up and has ceased to be important as a port after the construction of the port of Itaqui.
The port of Sao Luis is used mainly by fishing boats and pleasure craft. It has a few piers that allows mooring, but only at flood tide, to ships of 2,5 to 3,5 draft.

Cruisers are urged to take precautions if visiting this port. Policia Federal (immigration) and Customs are at the port entrance.
The historical center is at  30 minutes drive away.

Anchor south of Itaqui, near all the pilot boats and tugs. Good holding in mud. It is possible to tie the dinghy near a sloping ramp and climb the slippery steps to get ashore. There is a sort of marina, Marina Aven, which appears to dry out completely at low water and thus only suitable for catamarans or others who can sit on the bottom. They have a dock space for four yachts and (rain?) water is available.
2016/01/24
Actualizar
Joëlle
Comparta sus comentarios o fotos en "Port of Sao Luis (Maranhao Brazil)"

5.2nm
214°
Located on the coast of São Luís, the state capital, the port has a deep access channel and berths, enabling the mooring of large ships.
Port of Itaqui is the largest cargo port in Brazil, near the city of São Luís, Maranhão. It is not to be confused with the city of Itaqui, ...
13 Jan 16
anonymous

258nm
284°
The port of Belem is the most important commercial port on the N coast of Brazil. The port is situated on the E bank of the Rio Para about 70 miles from its mouth. Communication is maintained with all inland Amazon ports.

310nm
272°
Stands on the W bank of the rio Tocantins, about 90 NM from Belem. The town is built on the river bank and is an important trade center. The tidal range is about 3m; the current attains a rate of about 2.5 knots.
11 Jan 16
anonymous

357nm
101°
This is the most important city on the north coast and is also a busy fishing harbour.

419nm
306°
Cabo Norte is the limit  of the estuary of the Amazon river. It is 19 NM from Ilha Jipioca.
The cape is low, wooded, and slightly higher than the neighboring coast.
11 Jan 16
Joëlle