This large deep bay, at 3 M NW of Ulcinj, is open to the NW. It is surrounded by wooded hills rising to 389 m NE. Basically there is a beach lined with evergreens.
The bay is a lighthouse on Rt Mendras, the tip S of the entrance.
Is wetted by 4-7 m on the S side of the bay because the N is rock bottom.
Good protection except winds NW and W. be moored at the port, away from the Ferries by 4 0 or anchor in the bay by 4 m.
Well sheltered from N and NE, bounded by NW winds. The port is open to the S and SE winds dangerous.
2011/04/5
Update
Jojo 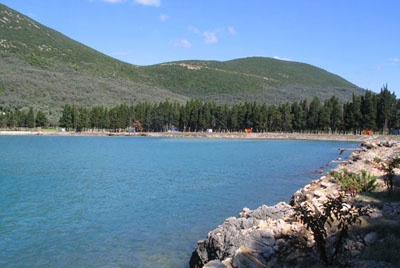 2.8nm
133°
Ulcinj is the southernmost city at Montenegrin coast, 8.5 NM at the northern Albanian border formed by the river Bojama (or Lum Buena). This small town is walled and fortified. It stands in the form of an amphitheater and is conspicuous from seaward.
The port is located in an open ...
5 Apr 11
Jojo

8.9nm
338°
Bar is a commercial port, the country's main port and a port of entry that provides a good shelter.
The approach is simple and Bar Harbour is easily identifiable by day or night. The harbor entrance is 0.8 NM to NNE of Cape Volujica. A marina is located to the east of the port ...
8 Apr 11
dd

11nm
336°
This wide bay is located 3 NM NW of Bar. Bordered by a sandy beach, is open to the S and SW. The village of Sutomore is at the bottom of the bay.
The bay is distinguished by its red cliffs S of village.
You can anchor in good time for the lunch, by 5 m.
5 Apr 11
Jojo

35nm
322°
The middle bay of Boka Kotorska, is connected to Topaljski Zaliv by Kumborski Strait, a deep passage.
This bay is steep and rocky on its S side, but the NE and NW shores, which are backed by mountains, are low and cultivated.
Uvala Kukuljina and UvalaKrtole, separated from each ...
12 Apr 11
Jojo

17nm
326°
Petrovac is easily identifiable thanks to two small islands (Katic and Sveta Nedjelja with a small church) located at S.
Coming from the S it is possible to pass between the islands and the mainland (9 m deep) but beware Katic Pl.
We moored alongside the wharf outside because ...
5 Apr 11
Jojo