The island lies to the southwest of Windley
Key, and to the northeast of Lower Matecumbe Key.
All of the key is within the Village of Islamorada as of November 4, 1997, when it was incorporated.
2010/03/22
Update
Joëlle

9.7nm
251°
Long Key was called Cayo Vivora (Rattlesnake Key) by early Spanish explorers, a reference to the shape of the island, which resembles a snake with its jaws open, rather than to its denizens.
In the early 20th century, Long
Key was the site of a luxurious fishing resort that ...
5 Apr 10
Joëlle

5.6nm
255°
The island lies to the southwest of Upper Matecumbe Key, and to the northeast of Craig
Key.
All of the key is within the Village of Islamorada as of November 4, 1997, when it was incorporated.
This key is the site of a number of Indian mounds and middens, most of which were ...
22 Mar 10
Joëlle 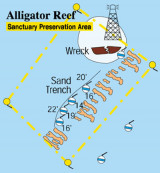 27nm
247°
Key Vaca is an island in the middle Florida
Keys, located entirely within the borders of the city of Marathon, Florida. It is often incorrectly identified as
"Marathon Key."Key Vaca is located between Fat
Deer Key and Knight's Key. Key Vaca is also connected via bridge to ...
22 Mar 10
Joëlle

3.3nm
258°
Indian Key was an unincorporated community in Monroe County, Florida, United States. It was located in the upper Florida
Key. It is currently a ghost town.
Indian Key is located about 3/4 of a mile in a southeasterly direction from the north shore of Lower Matecumbe Key.
Only ...
23 Mar 10
Joëlle