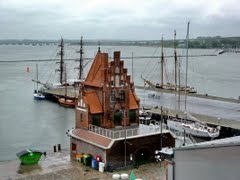 42nm
332°
Moen Lighthouse
With a growing traffic in the middle of the 1800s increased the need for demarcation of the Danish coasts. In 1845 the lighthouse was the maid garnish turned south and followed a few years after the lighthouse on Dasser Ort in Mecklenburg coast. The 13 meter high ...
15 Dec 09
holger

42nm
290°
Gedser Lighthouse
Started in 1802 as a tower with closed coal lighthouse which in 1834 changed to mirror apparatus. Tower increased in 1851 and fitted with fixed lens apparatus. In 1905 the tower was elevated again and the lens unit was exchanged for a rotary, bear glødenetsbrænder ...
15 Dec 09
holger