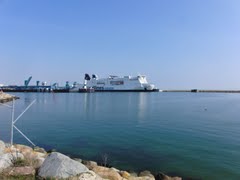 17nm
317°
From both sides of the Øresund trait, the bridge is a striking spectacle.
The 204 m high pylons are visible from far away. The Øresund fixed link is 16 km long and consists of a 8 km long bridge, a tunnel and an artificial island. You can cross the bridge either by car or by train
26 Sep 10

24nm
258°
Stevns LighthouseThe first lighthouse at Stevns was built in 1818 by Poul Løvenørn the end of the lighthouse's building inspector who was on top of Stevns Klint. It was not a tower, but merely an extension. In 1878 entered this a new 27 meter high lighthouse. The lighthouse ...
15 Dec 09
holger