Rt Rat is the NW extremity of a similar projection, 42m high, located 0.3 mile NE. Cavtatska Luka, an inlet, is entered between these points; the town of Cavtat is situated in the vicinity of its head. 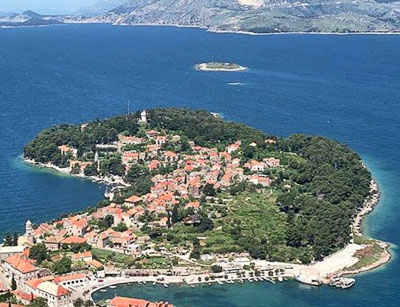 1nm
357°
Zupski Zaliv is entered between Rt Sustjepan and Rt Pelegrin, 2.5 miles NW. The E and SE shores of this bay are backed by mountains, but a valley through which a river flows lies within the N shore.
Malastica, 628m high, stands 1 mile N of the bay. This hill has a somewhat sharp ...
13 Apr 11
Jojo

22nm
115°
The middle bay of Boka Kotorska, is connected to Topaljski Zaliv by Kumborski Strait, a deep passage.
This bay is steep and rocky on its S side, but the NE and NW shores, which are backed by mountains, are low and cultivated.
Uvala Kukuljina and UvalaKrtole, separated from each ...
12 Apr 11
Jojo

1nm
258°
Otocic Cavtatski Grebeni, a group of islets and above-water rocks, lies up to 2 miles W of Rt Sustjepan, on a line NW-SE parallel to the coast.
Otocic Mrkan, the largest islet, is 65m high and appears dark from seaward.
NW is the island Bobara.
Between the two islands are ...
14 Apr 11
Jojo

0.1nm
174°
The small town of Cavtat is located 19 km southeast of Dubrovnik.
It is built on the peninsula of Rat (or peninsula St Roch) between two bays: Uvala Luka which separates the peninsula Sustjepan and uvala Tiha NE. Both bays are facing the island Supetar.Approaching Cavtat by the ...
14 Apr 11
Jojo