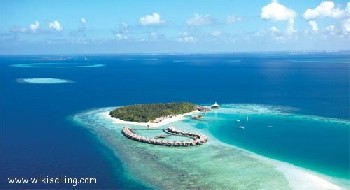 7.6nm
152°
Funadhoo (Funidu) lies about 0.3 mile N of the E end of Male, and is surrounded by a reef which dries in places.
A small tank farm, with three large and about six smaller tanks,stands on the island.
17 Nov 11
Jojo

8.5nm
85°
Himmafushi, inhabited, and Lankanfinolhu (Lankanfushifinolhu), about 1.8 miles SW, lie on the same reef, with a low islet about midway between.
Himmafushi is a fishing village.Lankanfinolhu houses Paradise island resort. On the outer reef, southeast of the island, there are two ...
12 Nov 11
Jojo

5nm
105°
The island of Bandos is 2 km² aera. It was open at tourist in 1972.
The turquoise of the lagoon, the lush green vegetation, the pearl white beaches are very beautifull.
19 Nov 11
Jojo

8.6nm
126°
Hulule, about 0.6 mile E of Funadhoo, bears some tall coconut palms; an airstrip runs the full length of the island and joins it to an islet close S. Airport buildings and a small village lie along the central part of the W side of Hulule.
The Malé International Airport is located ...
17 Nov 11
Jojo

5.3nm
190°
Giraavaru an islet covered in scrub and with a few coconut palms, lies on the SW side of Male Atoll, about 0.5 mile within the outer edge of the barrier reef.
A small bare islet lay at the extremity of the reef extending 1 mile W of Giravaru; a similar islet lies 1 mile S of
Giravaru.
It's ...
19 Nov 11
Jojo