The island of Bandos is 2 km² aera. It was open at tourist in 1972.
The turquoise of the lagoon, the lush green vegetation, the pearl white beaches are very beautifull.
2011/11/19
Update
Jojo 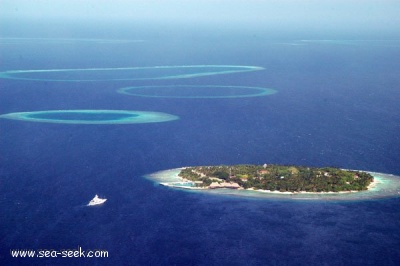 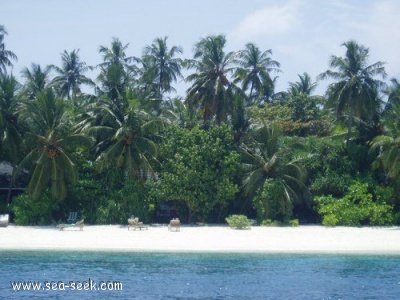 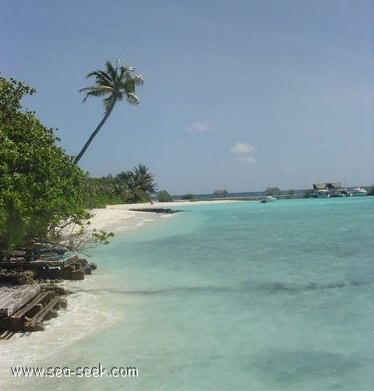 5.5nm
193°
Funadhoo (Funidu) lies about 0.3 mile N of the E end of Male, and is surrounded by a reef which dries in places.
A small tank farm, with three large and about six smaller tanks,stands on the island.
17 Nov 11
Jojo

4.3nm
151°
Hulule, about 0.6 mile E of Funadhoo, bears some tall coconut palms; an airstrip runs the full length of the island and joins it to an islet close S. Airport buildings and a small village lie along the central part of the W side of Hulule.
The Malé International Airport is located ...
17 Nov 11
Jojo

4.2nm
61°
Himmafushi, inhabited, and Lankanfinolhu (Lankanfushifinolhu), about 1.8 miles SW, lie on the same reef, with a low islet about midway between.
Himmafushi is a fishing village.Lankanfinolhu houses Paradise island resort. On the outer reef, southeast of the island, there are two ...
12 Nov 11
Jojo

2.5nm
110°
An lagoon lies off the W side of Furanafushi, entered at the SW corner of the fringing reef. Within the lagoon are depths to 9m, with a bottom of sand and coral heads.
This lagoon provides good anchorage for small craft. A stone jetty extends from the W end of the island. On the ...
17 Nov 11
Jojo

5.2nm
174°
Malé is the capital of the Republic of Maldives located at the southern edge of North Male' Atoll Kaafu.
Traditionally it was the King's Island from where the ancient Maldive Royal dynasties ruled and where the palace was located. Formerly it was a walled city surrounded by fortifications ...
16 Nov 11
Jojo

2.6nm
80°
Bodu Kalhi (Kadvoigiri Passage), the best and widest opening in the barrier reef, lies between Lankanfinolhu and Kaduoiygiri, an island 1.8 miles SW.
There are depths of over 50m in this N side of this channel about 0.6 mile S of Lankanfinolhu, but a bank with depths of 21 to 28m ...
13 Nov 11
Jojo