India, or the Republic of India, is a country in South Asia. Bounded by the Indian Ocean on the south and the Bay of Bengal on the south-east, it shares land borders with China, Nepal, and Bhutan to the north-east; and Burma and Bangladesh to the east.

In the Indian Ocean, India is in the vicinity of Sri Lanka and the Maldives; in addition, India's Andaman and Nicobar Islands share a maritime border with Thailand and Indonesia.

This sector describes the E coast of India, from Point Calimere to Balisahi Point, and includes the Coromandel Coast and the Orissa coast within its limits; Chennai (Madras) and Vishakhapatnam are the main harbors.

The E coast of India, from Point Calimere N to Cocanada, is about 500 miles long and is known as the Coromandel Coast.
That part of the coast between Cocanada and Balisahi Point, about 364 miles NE, is known as the Orissa Coast.

The low sandy coast fronting the W side of the Bay of Bengal is exposed to a very heavy surf. As a result, there is little or no shelter provided for vessels other than small craft.
The harbors at Chennai and Vishakhapatnam are the only large ports providing shelter and berthing facilities for all classes of vessels.
The coast S of Chennai appears to have been encroached upon by the sea to a considerable extent.

Between Pondicherry and Chennai, scattered hills rise to heights of 46 to 198m, at distances of 2 to 16 miles inland. Similar hills lie in the vicinity of Nellore, and as far N as the Gundlakamma River.

Between Godavari Point and Shortt Island, about 360 miles NE, the coast is low and barren in places and relatively high and densely wooded in other places. With the exception of Cocanada and False Bays, there are no indentations of any appreciable size.

The depth curves generally parallel the coast with the 200m curves lying about 15 to 25 miles offshore between Godavari Point and the mouth of the Devi River.

Changes in the monsoons are usually accompanied by bad weather. Cyclonic storms, although rare, sometimes occur near the middle of November or the beginning of April. The rainy season commences toward the end of June and ends in the latter part of November.

The direct effect of the Northeast Monsoon and the Southwest Monsoon winds on the surface waters of the Bay of Bengal is the development of seasonal currents in opposite directions.
Along the E coast of India, on the W side of the bay, it is not unusual to experience currents setting with velocities of 2 to 3 knots. From February through May, a strong current sets to the N, and from September through December, a similar current setting to the S may be experienced. A survey party found currents with velocities of 1 to 2 knots outside the 45m curve, less current between the 35 and 18m curves, and little or no current inside the latter curve. Close to the shore, the current was occasionally reversed.

When the current was setting to the N in the offing, a set out of Palk Strait was usually found, and presumably the reverse takes place when the current sets to the S. Tidal currents are experienced close offshore and they vary the strength of the current in the neighborhood of Middle Banks in Palk Strait. 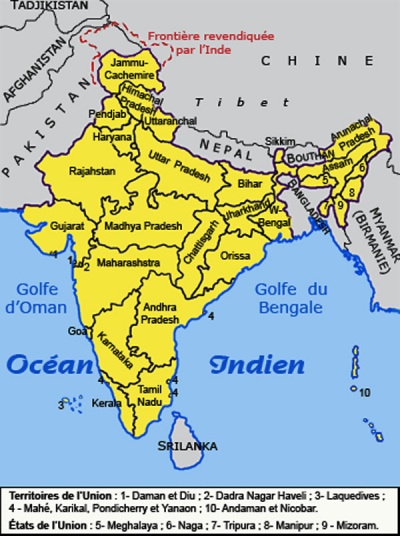 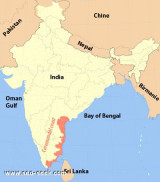 473nm
34°
India’s Hugli River (sometimes spelled "Hooghly") is a Ganges River distributary, one of the many branches of the river that are collectively known as the "Mouths of the Ganges".Vessels entering the Hugli River approach Eastern Channel Light Vessel, which is moored about 46.5 ...
24 Jun 13

286nm
23°
A low beach of sand hills extends 32 miles NE from Paluru Bluff to Chilka Mouth, the entrance of Chilka Lake. There are few landmarks found along this part of the coast.
Mita Kua Bungalow, a small white house on a sand hill close to the coast about 20 miles ENE of Paluru Bluff, ...
19 Apr 12
Jojo

378nm
33°
False Bay lies between Nurrea Banga Nassi and Maipura Point, about 20 miles NE, at the entrance of the Maipura River.
Depths in the bay decrease gradually toward the shore over a bottom of olive-green mud, in the S part, to a bottom of sand and mud, in the N part.
The shore ...
24 Apr 12
Jojo

113nm
330°
Cocanada Bay (Kakinada Bay), a shallow body of water filled with extensive drying mud flats at its head, is entered between Godavari Point and the coast about 2.8 miles WNW.
For many years the bay has been silting up because of the discharge from the Godavari River, about 8 miles ...
4 Apr 12
Jojo

113nm
331°
Hope Island (16 km long sand spit from the sand carried by the waters of Godavari delta), one of a chain of similar islands which form part of the delta of the Godavari River, is low, swampy, and covered with jungle.
The area between Kakinada coast and Hope Island is known as Kakinada ...
28 Mar 12
Jojo