Hope Island (16 km long sand spit from the sand carried by the waters of Godavari delta), one of a chain of similar islands which form part of the delta of the Godavari River, is low, swampy, and covered with jungle.

The area between Kakinada coast and Hope Island is known as Kakinada Bay. The water spread of the bay is about 100 km²

Hope Island protects the city of Kakinada from the strong cyclone/tidal waves/tsunamis coming from the Bay of Bengal. Hope Island acts as a sort of natural break water and provides tranquility to the ships anchored in Kakinada bay which makes Kakinada port one of the safest natural ports in the Eastern Coast of India.

2.7nm
328°
Godavari Point is the N extremity of a low sandy spit and narrow sand bank, which forms a part of the coast N of Hope Island.
The coast between the mouth of the Gautami Godavari and Godavari Point, about 24 miles to the N, is very low and intersected by many small outlets. The ...
11 Jul 12
AB

4.5nm
292°
The port of Cocanada comprises a partly-exposed anchorage located about 3 to 4 miles NNE of the entrance of the Cocanada River and is suitable for ocean-going vessels; cargo is transported by lighters between the anchorage and the wharves on the river bank abreast of the town.Tidal ...
4 Apr 12
Jojo

5.6nm
312°
Vakalapudi Lighthouse is situated about 10 Km north east from Kakinada (Cocanada) town.
It is a tower 23 m high circular masonry tower red and white bands.
The coast, up to 10 miles NE of Vakalapudi, is low and marked by numerous villages and coconut trees. Low sand hills then ...
5 Apr 12
Jojo

23nm
182°
Sacramento Shoal, hard shifting sand, lies off the entrance to the Guatami Godavari and extends about 4 miles SE and 3.5 miles E from Sacramento Light.
Depths over this breaking shoal range from 2.7 to 5.5m. This shoal is subject to frequent changes in position and depth.TidesThe ...
11 Jul 12
AB 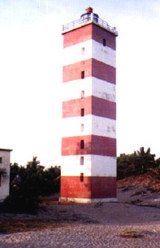 49nm
49°
Pudimadaka Village lies on the shore of a bight about 4 miles NE of Rambilli Beacon. A red stone temple, with three towers, lies in the village.The light was commissioned on 21st January 1971 and renovated in 1991. The lighthouse was on a masonry tower of 26 meters height. It has ...
5 Apr 12
Jojo

52nm
223°
Narasapur Point, low and wooded, lies on the E side of the mouth of the Vasishta Godavari, which is the southernmost branch of the Godavari River.
An obelisk, 24.4m high, lies about 1 mile N of the point.
During January and February, the current sets W at a maximum rate of 2 ...
28 Mar 12
Jojo