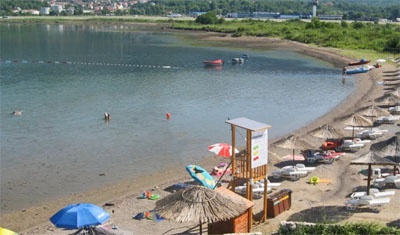 2.1nm
291°
The middle bay of Boka Kotorska, is connected to Topaljski Zaliv by Kumborski Strait, a deep passage.
This bay is steep and rocky on its S side, but the NE and NW shores, which are backed by mountains, are low and cultivated.
Uvala Kukuljina and UvalaKrtole, separated from each ...
12 Apr 11
Jojo

0.8nm
261°
Ostrvo Stradioti, the largest of the islands lying in the SE part of the bay, is 37m high and is marked by several beacons at its W extremity. It is easily recognized against the lowlands in the background.
12 Apr 11
Jojo

0.6nm
186°
Uvala Krtole is in the area SE of Tivaski Zaljev, M Otok Island (the smallest), Stradioti (or Sveti Marko, the largest) and Prevlaka (or Ostrvo Cvijceca or "flower island", the closer the coast).
You can anchor with 5 m in this protected area of ​​the NE and N.
Coming from ...
9 Apr 11
Jojo

1nm
337°
The Marina Kalimanj in Tivat is a well protected marina, a natural harbour, where the docking locations are safe.
All around the Marina there are ancient Venetian palaces protected by UNESCO, old churches, restored stables.
The name Tivat comes from the Celtic word "teuta", meaning town.
10 Apr 11
Jojo

1.1nm
278°
Plicina Jezicac, nearly awash, lies at the outer end of a spit which extends about 0.5 mile WNW from the N extremity of Ostrvo Stradioti. Vessels should not attempt to pass between this reef and the islands to the E.
12 Apr 11
Jojo

1.3nm
266°
Otocic Otok, the W and smallest island in the group, can be identified by a church with a prominent belfry standing on its N shore.
12 Apr 11
Jojo