Bow-to and Stern-to moorings for about 10 boats plus anchor space. Water, electricity and internet use available. Drinks and tapas at Luciano’s small bar. Speaks Spanish and English. Regular water taxis.

Although the channel leading up to this mini-marina is not sufficiently deep to admit the average deep draught cruising yacht, centreboarders, catamarans, and smaller yachts can get through. 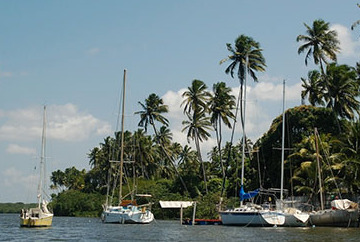 1nm
120°
It is best to proceed up the river to Jacare, but beware of the many shoals and strong currents. It is advisable not to use a "danforth" type anchor as it can more easily be tripped when the tide turns. Beware of the unlit fishing nets strung across the river. At Jacare, yachts ...
13 Jan 16
Joëlle

3.9nm
28°
Cabedelo is situated approximately 100MN south of Natal where the Rio Paraiba enters the sea. It's location makes it a useful arrival/departure point for Brazil. It is situated on the eastern bank of the Northern Paraíba River Estuary, just 18 km from João Pessoa City, Capital ...
13 Jan 16
Joëlle