All of the key is within the Village of Islamorada as of
November 4, 1997, when it was incorporated.

15nm
251°
Long Key was called Cayo Vivora (Rattlesnake Key) by early Spanish explorers, a reference to the shape of the island, which resembles a snake with its jaws open, rather than to its denizens.
In the early 20th century, Long
Key was the site of a luxurious fishing resort that ...
5 Apr 10
Joëlle

11nm
252°
The island lies to the southwest of Upper Matecumbe Key, and to the northeast of Craig
Key.
All of the key is within the Village of Islamorada as of November 4, 1997, when it was incorporated.
This key is the site of a number of Indian mounds and middens, most of which were ...
22 Mar 10
Joëlle 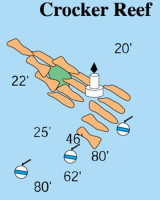 0.6nm
158°
Crocker
Reef (Buoy 12) is located about 4 miles southeast of Snake
Creek in Islamorada.  This reef is primarily an intermediate to deep spur
& groove system typical of the outer reef along most of the Florida Keys. Not far from the navigation buoy pictured above ...
16 Apr 12
JB

3.5nm
306°
Marina is located at the W end of Plantation Key, just before Islamorada village.
Plantation Yacht Harbor lies off the Florida Straits. Between
ICW markers 78 and 78A. It will bear approximately 150°.
Look for red and white lighthouse at the end of the breakwater.
Reservations ...
27 Mar 10
Alain

16nm
35°
The first underwater park in the U.S., John Pennekamp Coral Reef State
Park encompasses approximately 70 nautical square miles.
It is the coral reefs and their associated marine life that bring most visitors to the park.
Many enjoy the view of the reef from a glass-bottom ...
31 Mar 10
Joëlle