The prominent smoke stcks of the Hawiian Electric power plant are an obvious landmark. The Mehaffy guide claims that the trade winds are "reduced to a whisper".

We anchored in about 9 meters of water so clear that ripples on the sand were easily discernable.

While there's not much in the way of coral, snorkling is fun just because of the water's clarity. 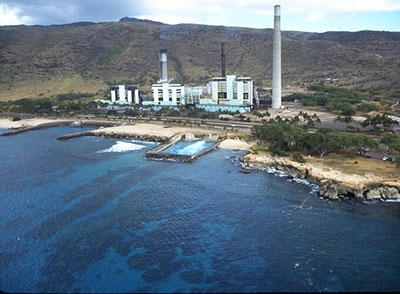 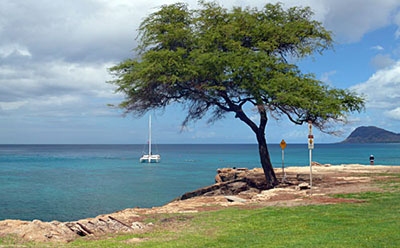 1.7nm
159°
This is the only "real" marina in Hawaii. It has: floating docks a fuel dock laundry showers gas barbecues easy access to swimming lagoons The marina listens on VHF 71 and likes to clear traffic in and out as there is very little manoeuvering room in the chanel. Commercial traffic ...
7 Dec 15
Joëlle

8.9nm
324°
This is a huge anchorage directly in front of a wide valley. The valley was use for bombing practice during WWII. You can still see the observation towers used by the military.
Now, however, a fight has erupted between the government and the Hawaiians over the protection of the ...
10 Dec 15
Joëlle

13nm
99°
Keehi lagoon is a great place for canoeing and boating since the waters are usually calm in the protected lagoon.Many canoe clubs do their practice session here and outrigger canoe regattas take place from time to time. However, the man-made beach is not suitable for swimming, ...
7 Dec 15
Joëlle

17nm
12°
Waimea bay is located in Haleiwa, on the N shore of Oahu, at the mouth of the Waimea river. Waimea valley extends behind Waiema bay.Waiema means "red water" in Hawaiian.Captain Charles Clerke aboard HMS Resolution stopped at Waimea Bay on February 28, 1779. Clerke had shortly before ...
10 Dec 15
Joëlle