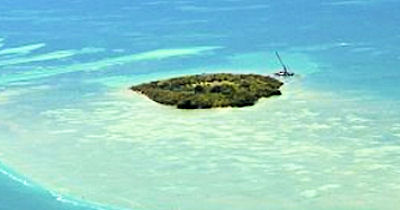 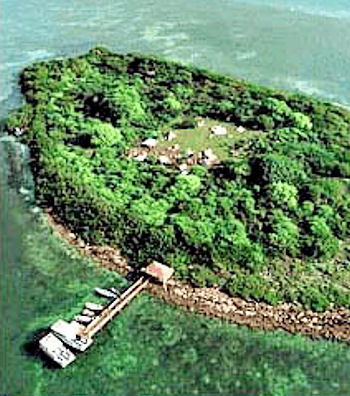 We can pull dinghy ashore or wade ashore for self guided tour of Island.
We used the East side of the
Island to dinghy in, wade the last few yards, and tie up to a bench or tree.

There is a mooring consisting of  3-5 buoys off Indian Key's SE shores.
If any are available, you can pick up a buoy in 5 to 7 feet of water, or alternately, drop anchor.

Protected some in E or NW winds. Exposed to others.

We are so happy to have read in the website that there was Mooring buoys because with the win at 20 knots we feel more safe.

6.2nm
247°
Long Key was called Cayo Vivora (Rattlesnake Key) by early Spanish explorers, a reference to the shape of the island, which resembles a snake with its jaws open, rather than to its denizens.
In the early 20th century, Long
Key was the site of a luxurious fishing resort that ...
5 Apr 10
Joëlle

2.2nm
248°
The island lies to the southwest of Upper Matecumbe Key, and to the northeast of Craig
Key.
All of the key is within the Village of Islamorada as of November 4, 1997, when it was incorporated.
This key is the site of a number of Indian mounds and middens, most of which were ...
22 Mar 10
Joëlle

23nm
245°
Key Vaca is an island in the middle Florida
Keys, located entirely within the borders of the city of Marathon, Florida. It is often incorrectly identified as
"Marathon Key."Key Vaca is located between Fat
Deer Key and Knight's Key. Key Vaca is also connected via bridge to ...
22 Mar 10
Joëlle

0.1nm
85°
Indian Key was an unincorporated community in Monroe County, Florida, United States. It was located in the upper Florida
Key. It is currently a ghost town.
Indian Key is located about 3/4 of a mile in a southeasterly direction from the north shore of Lower Matecumbe Key.
Only ...
23 Mar 10
Joëlle

0.6nm
295°
Just N of the 10 foot span, Robbie's Marina overlooks the western flank of Lignumvitae Channel. A large shoal separate this facility's docks from the channel. This hazard is indicated by a series of floats on a rope. To safety access the marina, you must cruise either south or north ...
23 Mar 10
JB

1.8nm
323°
Lignumvitae Key is an island in the upper Florida
Keys. It is located due north of, and less than one mile from the easternmost tip of Lower Matecumbe Key.
The island has the Keys' highest point above sea level of 19 feet (5.8 m), which beats the island of Key West's
Solares ...
23 Mar 10
Joëlle