The islands have a combined north-south extent of some 40 km (25 mi).

The anchorage is plainly indicated by the opening of Igarape do Inferno. The tide reaches its highest level in Canal de Varador de Maraca about 2 to 3 hours after the beginning of the flood tide.
At the equinoxes, the tide has been observed to rise 10m and tidal currents to run for a short period at a rate of 7 knots. This rate rapidly diminishes within four days after springs. During these periods, there is a heavy sea offshore.

Ilha Jipioca lies about 2 miles N of the S entrance point off Canal Turluri and is inaccessible as it is surrounded by shallow mud banks. 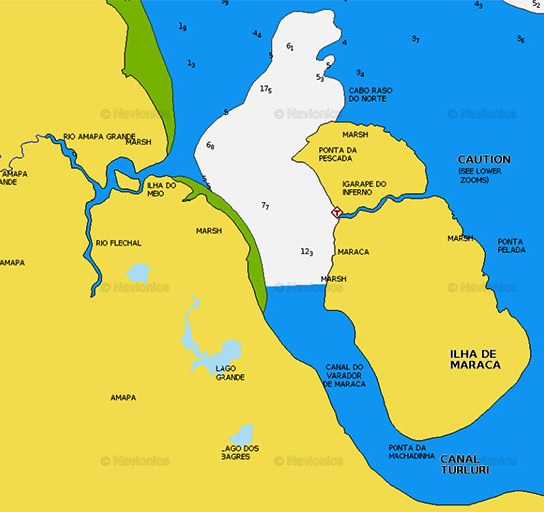 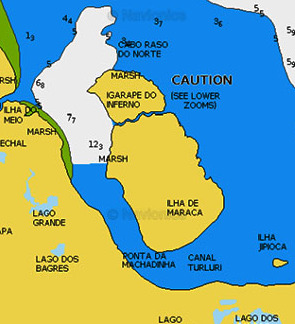 30nm
129°
Cabo Norte is the limit  of the estuary of the Amazon river. It is 19 NM from Ilha Jipioca.
The cape is low, wooded, and slightly higher than the neighboring coast.
11 Jan 16
Joëlle

161nm
333°
Cabo Orange (cape Orange) is a cape on the N coast of Brazil, separated from the coast of French Guiana by a large bay watered by the estuary of the Oyapock River Cape Orange is the northernmost point of the Brazilian state of Amapá. It is located in an area of tidal marshland protected ...
10 Jan 16
Joëlle

260nm
168°
Stands on the W bank of the rio Tocantins, about 90 NM from Belem. The town is built on the river bank and is an important trade center. The tidal range is about 3m; the current attains a rate of about 2.5 knots.
11 Jan 16
anonymous

238nm
325°
Îles du Salut, 3 in number, are  located about 7 NM NE of Pointe Charlote.Ile du Diable, the northernmost, is 40m high. Ile Royale, 66m high, is the largest and westernmost, while Ile Saint-Joseph, only 30m high, is the southernmost.

234nm
152°
The port of Belem is the most important commercial port on the N coast of Brazil. The port is situated on the E bank of the Rio Para about 70 miles from its mouth. Communication is maintained with all inland Amazon ports.