A light is shown from a green metal, tripod structure standing on the N edge of Banco Orange, 3.5 miles NNE of Cabo Orange.
2016/01/10
Update
Joëlle 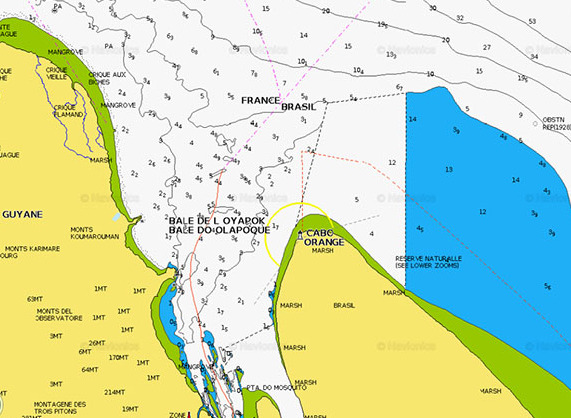 81nm
309°
Îles du Salut, 3 in number, are  located about 7 NM NE of Pointe Charlote.Ile du Diable, the northernmost, is 40m high. Ile Royale, 66m high, is the largest and westernmost, while Ile Saint-Joseph, only 30m high, is the southernmost.

81nm
309°
Anchorage can be taken in the bight formed by the S side of Ile Royale and the W side of Ile Saint-Joseph.
20 Jan 16
Joëlle

81nm
310°
Île du Diable part of Salut islands is better known as Devil's Island. The total area is 0.62 km2 (62 hectares) The islands were used as a penal colony from 1852 onwards, earning them a reputation for harshness and brutality. This system was gradually phased out and has been completely ...
20 Jan 16
Joëlle

81nm
309°
Anchorage can be taken in the bight formed by the S side of Ile Royale in depths of about 9m soft mud, good shelter from the swell, and good holding .ground.

162nm
293°
Port NW French Guiana, on the east bank of the Maroni River opposite Albina, Suriname. It was formerly headquarters of the country’s penal colonies and the site of the largest prison, closed in 1944. Apart from its port facilities, local economic activities include sawmilling, ...
21 Jan 16
Joëlle

163nm
299°
Pointe des Hattes marks the N limit of the French Guiana and the separation with Suriname country.
20 Jan 16
Joëlle