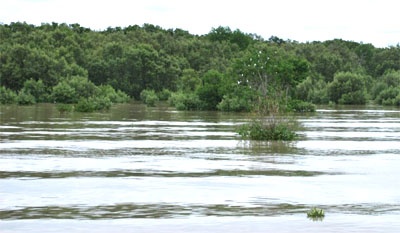 Located South-west of Johor, about 5,5 NM NW of Tg Piai, 1 km offshore from the quaint little fishing village of Kampung Air Masin in Kukup Laut (Pontian District), Pulau Kukup is an low, flat island entirely covered by mangrove forest and surrounded by mudflats - the mudflats extend up to a few kilometres on the West and Northwest of the island.
There is currently no human habitation or man made structures on the island.

In order to promote preservation of this unique mangrove habitat, Pulau Kukup is designated as a Ramsar site (or otherwise known as a Wetlands of International Importance) on 31 January 2003, it is also protected as a national park under the Johor State Park Corporation Enactment 1989 since 27 March 1997.

Pulau Kukup is dissected by a few tidal creeks and channels.In passing Pulau Kukup, caution must be exercised because the E current sets strongly toward the shore and the W current toward Long Bank on the opposite side of the fairway.
2012/01/6
Mettre à jour
Jojo
Partagez vos remarques ou photos sur "Pulau Kukup (Johor - Malaysia)"

10nm
196°
Karimun Kecil or Little Karimun, separated from the NE side of Great Karimun by a deep channel about 0.5 mile wide, is a bold island, 377m high.
In the NW approach to the channel between Great Karimun and Little Karimun are two islets, Nangoi, 39m high, about 1.2 miles W of the ...
1 Feb 12
Jojo 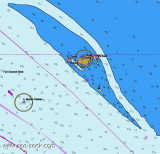 13nm
309°
Pulau Pisang (English: Banana island) is a small island located off the Western coast of the Malaysian state of Johor. It is about 12 km from the town of Pontian Kecil and 5 km from Benut town. It is the siteof Pisang Lighthouse guiding ships into the western entrance of the Singapore ...
6 Jan 12
Jojo