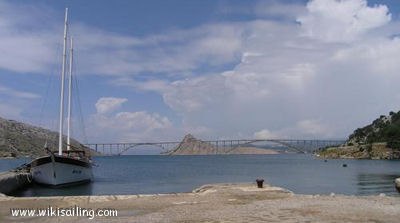 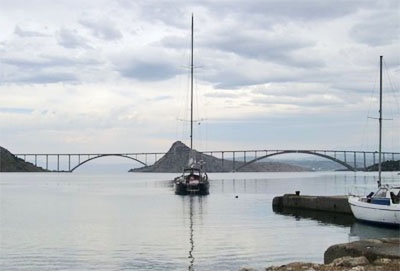 0.8nm
44°
Tihi Kanal, 3 miles long, connects the NW end of Vinodolski Kanal to Rijecki Zaliv.
The channel is deep and tortuous and leads between the mainland and the NE end of Otok Krk.
2 Aug 11
Jojo

14nm
247°
Kanal Vela Vrata connects the N end of Kvarner to Rijecki Zaliv and leads between the N end of Otok Cres, on the E side, and the mainland coast, on the W side.
The channel is deep and clear, the bottom being formed of mud.
31 Jul 11
Jojo

16nm
186°
Otok Plavnik lies with Rt Veli Pin, its N extremity, located 0.7 mile E of the E side of Otok Cres and divides Srednja Vrata in its S part into two channels.
This cliffy island is 194m high and partly wooded.
Several small islets lie on a shoal bank which extends about 1.5 miles ...
4 Aug 11
Jojo

3.4nm
346°
Bakarski Zaljev is a bayalmost closed on the continent, and SE of Rijeca N O. Krk. It is entered 6 NM ESE of Rijeka and is accessible by a channel of 0.3 nm wide at its narrowest point.
It is equipped with facilities for cargo.
There is a shipyard in Kraljevica, an oil terminal ...
31 Jul 11
Jojo

16nm
187°
Kanal Krusija leads to the W of Otok Plavnik.
This channel is frequented because of its steep-to shores and deep passage.
A strong current may occasionally be experienced in this channel, depending on local weather conditions, but this passage is recommended over the one leading ...
4 Aug 11
Jojo

4.8nm
159°
Zaliv Soline, a nearly landlocked small bay, lies 1.5 miles WNW of Rt Silo and is entered through a narrow channel.
Although there are depths of 10 to 12m over a width of 100m in the entrance, the bay has depths of only 2 to 4m and is used mostly by small craft.
1 Aug 11
Jojo