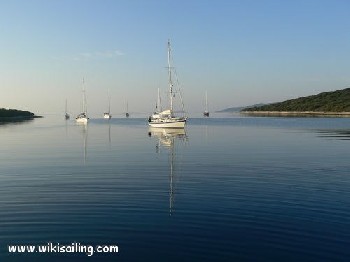 On the NE coast, long handle with good protection from all winds except from Sirocco.
Nice sea-urchin fishery.
2011/07/31
Update
Jojo

1.2nm
181°
Otok Unije, a long and irregular shaped island, lies with Rt Vnetak, its SW extremity, located 7 miles NNW of Otok Susak and at W from N O. Losinj from it is separated by Unijski Kanal.
The island consists of a chain of partly wooded hills and the summit, 132m high, stands in the ...
31 Jul 11
Jojo

15nm
300°
This area is located between Cape Kamenjak SW Marler and heading to the N.
Seven small islands surrounded by rocks and shoals dot the entrance Medulinski Zaljev.
Four tags indicate isolated rocks in the W of the bay, their presence is uncertain.The chanel between Rt Munat et ...
26 Mar 11
Joëlle

28nm
359°
Kanal Vela Vrata connects the N end of Kvarner to Rijecki Zaliv and leads between the N end of Otok Cres, on the E side, and the mainland coast, on the W side.
The channel is deep and clear, the bottom being formed of mud.
31 Jul 11
Jojo

21nm
300°
Rt Prostina is located at the end of Fasanski Kanal and is the N point of Luka Pula entrance.
There are few bays between Rt Prostina and Rt Od Volam that defines N Premantura Peninsula.
2 Sep 11
Jojo

21nm
337°
The large natural inlet Zaljev Rasa offers the best protection of all sectors of the entire E coast of Istria, while the Bora blows strongly here. This bay is sinking into the earth near 6M, between Rt Ubac and Rt Mulac. The Rijeka Rasa flows into the bottom, creating a current that ...
5 Sep 11
Jojo

5.8nm
155°
Otocici Srakane, consisting of two narrow islets, extends up to 3.7 miles SE of the SE extremity of Otok Unije.
These islets are partly wooded and steep-to.
Hrid Silo lies close SE of the SE islet.
A light is shown from a prominent structure, 10m high, standing on this rock.
1 Aug 11
Jojo