Otocici Srakane, consisting of two narrow islets, extends up to 3.7 miles SE of the SE extremity of Otok Unije.
These islets are partly wooded and steep-to.
Hrid Silo lies close SE of the SE islet.
A light is shown from a prominent structure, 10m high, standing on this rock.
2011/08/1
Update
Jojo 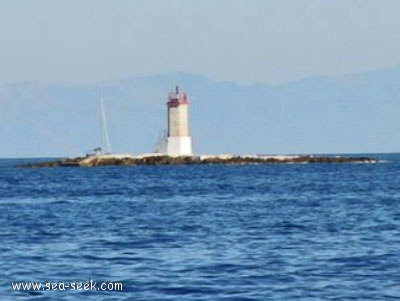 4.7nm
328°
Otok Unije, a long and irregular shaped island, lies with Rt Vnetak, its SW extremity, located 7 miles NNW of Otok Susak and at W from N O. Losinj from it is separated by Unijski Kanal.
The island consists of a chain of partly wooded hills and the summit, 132m high, stands in the ...
31 Jul 11
Jojo

21nm
121°
Olipski Kanal leads NNW between the E side of Otok Silba and the W side of Otok Olib and merges into the N end of Pohlipski Kanal.
This channel is deep and has a minimum navigable width of 0.7 mile. It is often used by vessels proceeding to and from Zadar.
Good anchorage is ...
18 Sep 11
Jojo

22nm
120°
Otok Olib is located E of O. Silba. It belongs to Zadar archipelago.The island has been inhabited since Roman times. The residents bought their island in 1900. The only village on the island was established around the port.
To the east of the island you will find some small hidden ...
27 Jul 11
Jojo

20nm
309°
This area is located between Cape Kamenjak SW Marler and heading to the N.
Seven small islands surrounded by rocks and shoals dot the entrance Medulinski Zaljev.
Four tags indicate isolated rocks in the W of the bay, their presence is uncertain.The chanel between Rt Munat et ...
26 Mar 11
Joëlle

15nm
126°
Kvarnericka Vrata, 5 miles wide, is the principal channel leading between the open sea and the S part of Mali Kvarneric. It lies between Otok Premuda and Otok Silba, on the S side, and Otok Ilovik, on the N side.
4 Aug 11
Jojo

19nm
138°
Premuda is located northwest of Otok Skarda which it is separated by a channel about 0.9 m wide (Premuda Vrata). The tips of each side of the channel are overwhelmed shoals and should not be approached too closely.
The coast is home to 2 W moorings and a small port and there is ...
17 Sep 11
Jojo