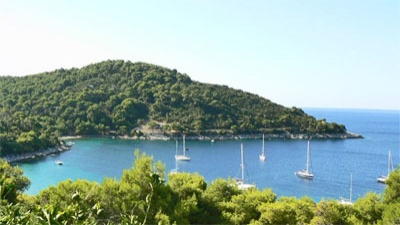 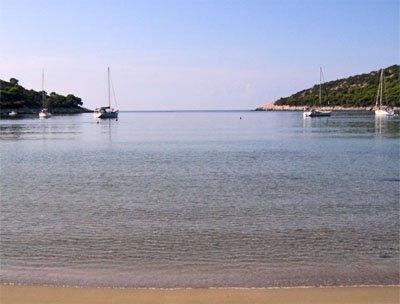 6.5nm
359°
Stonski Kanal, a deep inlet, indents the SE end of Poluotok Peljesac at the NW end of Kolocepski Kanal.
Its shore rises rapidly on each side and provides protection from NE and SW winds. The village of Brocej is situated on the S shore 3.8 miles within the entrance.
It is fronted ...
25 Apr 11
Jojo

4.3nm
48°
Otoc Jakljan, fronted by islets  (Kosmec and Crvina) on its N side, lies close NW of the SW extremity of Otoc Sipan.
A white stony peak, 225m high, stands near the center of this island and is conspicuous from seaward.
Jakljan island is separated of Sipan by a narrow passage, ...
16 Apr 11
Jojo

9.4nm
94°
The island of Lopud belongs Elaphites. It is only 4.6 km2.
It has a pleasant village and some old buildings. You'll find a sandy beach.
There are two good anchorages: uvala Lopud (NW of the island), where is the village and uvala Sunj (SE of the island).
15 Apr 11
Jojo

15nm
333°
The narrow sea from Zaliv Klek Neum is 4 NM long and lies at the NE channel Malog Stone. It is surrounded by mountains and is inserted between Rt Rep Kleka and Rt Meded.
Depths exceeding 20 meters in most cases. There are several anchorages.
The SE part and W peninsula ...
3 May 11
Jojo

4.2nm
20°
Otoc Olipa, 206m high, lies with its SE side 0.5 mile NW of the NW extremity of Otoc Jakljan. This island is rocky and partly wooded. A light is shown from a prominent tower, 11m high, standing on the S extremity.Veliki Vratnik, a channel, leads between Otoc Jakljan and OtocOlipa. ...
16 Apr 11
Jojo