The total length of the Florida Straits exceeds 300 miles. The width varies from 60 to 100 miles. The main channel has been sounded to a depth of 6,000 feet.

Sites around Strait of Florida

41nm
317°
Long Key was called Cayo Vivora (Rattlesnake Key) by early Spanish explorers, a reference to the shape of the island, which resembles a snake with its jaws open, rather than to its denizens.
In the early 20th century, Long
Key was the site of a luxurious fishing resort that ...
5 Apr 10
Joëlle

66nm
2°
Elliott Key is the northernmost of the true Florida
Keys (those 'keys' which are ancient coral reefs lifted above the present sea level), and the largest key north of Key
Largo. It is located entirely within Biscayne National Park.
It is bordered by the Atlantic Ocean to ...
18 Apr 10
Joëlle

48nm
354°
The first underwater park in the U.S., John Pennekamp Coral Reef State
Park encompasses approximately 70 nautical square miles.
It is the coral reefs and their associated marine life that bring most visitors to the park.
Many enjoy the view of the reef from a glass-bottom ...
31 Mar 10
Joëlle

49nm
297°
Key Vaca is an island in the middle Florida
Keys, located entirely within the borders of the city of Marathon, Florida. It is often incorrectly identified as
"Marathon Key."Key Vaca is located between Fat
Deer Key and Knight's Key. Key Vaca is also connected via bridge to ...
22 Mar 10
Joëlle 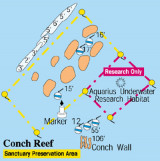 40nm
322°
The island lies to the southwest of Upper Matecumbe Key, and to the northeast of Craig
Key.
All of the key is within the Village of Islamorada as of November 4, 1997, when it was incorporated.
This key is the site of a number of Indian mounds and middens, most of which were ...
22 Mar 10
Joëlle