This old convent overlooking the sea on its rocky promontory, is remarkable before reaching the marine Sisco, a little further south.
2012/05/3
Update
Jojo 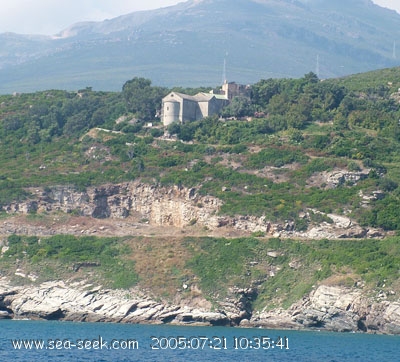 4.4nm
185°
Capo Sagro is located at 11 NM. S Finocchiarola islands. He has a signal station and a semaphore rises N of it.
Mount Merizatodio, 778 m high, is 1.5 MN to W Cape and dominates the immediate area. The village of Erbalunga, situated 1.5 miles SSW of Capo Sagro, stands on the S ...
6 May 12
Jojo

19nm
47°
Capraia is one of the seven islands of the Tuscan Archipelago, on the road between Cape Corsica and Elba. It is an island of 335 inhabitants (the Capraiesi) of the Province of Livorno. It lies 64 km from Livorno, 37 km from Gorgona and 31 km from Corsica. Its area is 19 km2. It has ...
26 Feb 14
marchew

1.4nm
178°
Located between Marines de Sisco and Erbalunga, this point is well known to divers.
Cape Sagro is an anchorage where the ancient Roman fleet landed the goods for this part of Cap Corse.

This site is of outstanding beauty and it is not unusual to see diving teams of experienced ...
1 May 12
Jojo

11nm
229°
The Gulf of Saint Florent form a large body of water open to the North to NW winds, but sheltered by the mountains Libeccio of Balagne.
Strong wind blows from east sometimes jump off the mountain which is extended by the Cap Corse and a rise in the Gulf chop rather unpleasant.
The ...
6 May 12
Jojo