Pyramid Shoal, which lies on the N side of the SE end of South Sands, has a least depth of 3.4m, hard sand, and is the most dangerous shoal in the area because of its depth and protrusion into the fairway.

8.9nm
37°
Bambeck Shoal, the nearest shoal on the NE side lies on the NE side of the fairway.
Bambek shoal, about 4 NM offshore, lies SW of the mouth of Sungai Sepang Besar.
It has a depth of 0,3 m near its center and is composed of hard sand.
Its NW and SE sides are steep-to with ...
30 Dec 11
Jojo 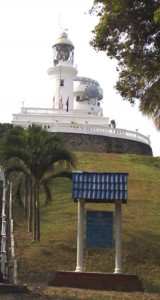 16nm
94°
Tanjung Tuan, also called Cape Rachado, is the site of the oldest - and still functioning - lighthouse in Malaysia.
Cape Rachado Lighthouse, also called Rumah Api Tanjung Tuan, was built somewhere between 1528 and 1529 by the Portuguese to help guide ships to the Malacca port. ...
31 Dec 11
Jojo

14nm
64°
Port Dickson is situated on the W coast of the Malaysian Peninsula facing the Strait of Malacca. The town stretches along the coast in the direction of Tanjung Tuan, located 8 miles SE.
Port Dickson is an important oil terminal operated by Shell and Esso, and is a minor port for ...
31 Dec 11
Jojo

16nm
79°
Admiral Marina & Leisure Club is within Admiral Cove.
Admiral Cove is a concept realised from a desire to create a world class premier integrated marina resort. Located along the unsploit plains of Port Dickson, it is today a major international tourist destination.Tel: ...
2 Jan 12
Jojo