Green light at the W entry of St Florent gulf.
The green light dimming (every 4 seconds) from the tip of the Mortella covers the entrance to the Gulf of Saint Florent, but is masked to the West to increase by less than 214 ° tip Curza.
Built in the sixteenth century by the Genoese, it was bombed in 1794 by the English fleet of Admiral Nelson. Consolidated in the state by the Conservatoire du Littoral.
2012/05/7
Update
Jojo 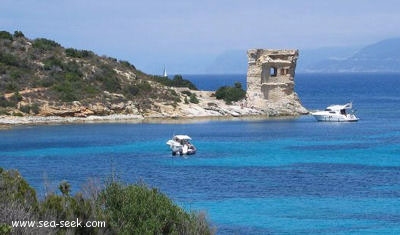 9.9nm
80°
Capo Sagro is located at 11 NM. S Finocchiarola islands. He has a signal station and a semaphore rises N of it.
Mount Merizatodio, 778 m high, is 1.5 MN to W Cape and dominates the immediate area. The village of Erbalunga, situated 1.5 miles SSW of Capo Sagro, stands on the S ...
6 May 12
Jojo

1.9nm
135°
The Gulf of Saint Florent form a large body of water open to the North to NW winds, but sheltered by the mountains Libeccio of Balagne.
Strong wind blows from east sometimes jump off the mountain which is extended by the Cap Corse and a rise in the Gulf chop rather unpleasant.
The ...
6 May 12
Jojo

31nm
51°
Capraia is one of the seven islands of the Tuscan Archipelago, on the road between Cape Corsica and Elba. It is an island of 335 inhabitants (the Capraiesi) of the Province of Livorno. It lies 64 km from Livorno, 37 km from Gorgona and 31 km from Corsica. Its area is 19 km2. It has ...
26 Feb 14
marchew

0.6nm
188°
The river Santu is a stream of Haute-Corse region of Corsica, which flows into the Mediterranean Sea to the western Gulf of Saint-Florent, S of the tip of Mortella.
Approach slowly anchorage area. We anchor by 3 to 6 m.

Very sheltered anchorage by W wind, but exposed to the Mistral.
7 May 12
Jojo

1nm
279°
Place of arrival of two boats which connect from Saint-Florent, the beach Loto is very busy.
Perfect beach of fine sand and clear eastern desert Agriates. The water of great purity, the beauty of bush attracts many tourists from throughout the day by boat from St Florent.