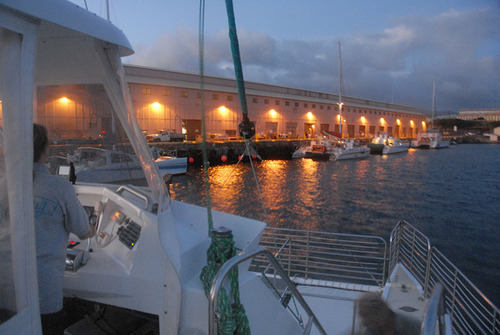 Located in Port Allen on Kauai's south shore, the Port Allen Marina Center serves the local growing visitor and boating industry. The 23,600 square-foot marina center was completed in August 2002 and is home to a diverse range of local retailers, boating tour companies and gift shops.

0.8nm
114°
Wahiawa Bay is a bay in Hawaii, situated between Weli Point and Glass Beach. Wahiawa Bay is close to Port Allen Small Boat Harbor and Eleele Shopping Center.
Excellent anchorage in strong trades. The NE trade wind blows down the bay but the fetch is so short that no chop can develop ...
5 Dec 15
Joëlle

13nm
77°
Nawiliwili Harbor is home to a small boat harbor and a cruise ship and cargo commercial port.

Located at the mouth of Hule'ia Stream and near Niumalu Beach park, it may look familiar as the backdrop for the movie Raiders of the Lost Ark. Kalapaki

14nm
68°
Just 3 miles north of Nawiliwili is Hanamaulu Bay, an excellent anchorage in westerlies. With no nearby mountains, the winds blow steadily at about the same speed as out at sea.
The bay shoals gradually and predictably to a nice beach park with showers and picnic tables.In westerly ...
5 Dec 15
Joëlle

15nm
69°
On the south shore of Hanamaulu bay, semi-protected by a breakwater, is an old warf which was once used for offloading sugar. Now it serves as a place to fish and drink beer.

86nm
100°
Waimea bay is located in Haleiwa, on the N shore of Oahu, at the mouth of the Waimea river. Waimea valley extends behind Waiema bay.Waiema means "red water" in Hawaiian.Captain Charles Clerke aboard HMS Resolution stopped at Waimea Bay on February 28, 1779. Clerke had shortly before ...
10 Dec 15
Joëlle

80nm
108°
This is a huge anchorage directly in front of a wide valley. The valley was use for bombing practice during WWII. You can still see the observation towers used by the military.
Now, however, a fight has erupted between the government and the Hawaiians over the protection of the ...
10 Dec 15
Joëlle