The Nicobar islands archipelago are situated south of the neighboring Andaman Islands archipelago, in the eastern Indian Ocean. It is separated from Taïland to the E by the Andaman sea and it is composed of three groups.

Isle of Man and Tillangchong (17 km²) - which are both uninhabited, with Tillangchong being a designated wildlife sanctuary.

On 26 December 2004, several islands were heavily damaged with initial reports of islands broken in two or three pieces and coral reefs moved above water.

In the Nicobar Islands, heavy rains occur from May through November. More moderate amounts occur from December through mid-January, and relatively small amounts from January through April.
As a rule, the islands with the higher elevation receive the greatest amount of rain.
Thunderstorm frequency varies from island to island. The greatest activity occurs during those months immediately preceding and the first few weeks immediately following the onset of the Southwest Monsoon. Thunderstorms occur most frequently during May and June at Port Blair, when about 4 to 6 days per month have them. In November, thunderstorms occur on the average of 3 days per month at this port.

The currents in the vicinity of Car Nicobar Island flow rapidly enough to cause tide races, particularly N of the island. During the month of February, usually a calm month, from a position about 6 to 8 miles E of the island, a current setting SW at a rate of 7 knots has been experienced about 1.5 hours after HW. 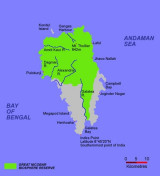 66nm
156°
Great Nicobar is the largest of the Nicobar Islands of India, it is also the southermost point of India.
The island covers 1045 km² but is sparsely inhabited.
The island was severely affected by the 2004 Indian Ocean earthquake tsunami with many deaths, and was cut off ...
30 Nov 11
Jojo

4.4nm
145°
Katchall Island is separated from Camorta Island and Nancowry Island to the NE by Revello Channel, which is about 3.8 miles wide and apparently free from dangers, except for a detached 12.8m patch which lies about 4.5 miles NE of the SE end of Katchall Island.
The island is densely ...
30 Nov 11
Jojo

77nm
334°
Car Nicobar island, or PU in the local langage, the N island of the group, lies about 77 miles SSE of Little Andaman Island.
The island is densely wooded, mostly coconut trees.
The island has been reported to be a good radar target up to14 miles.
The Car Nicobar is ...
28 Nov 11
Jojo