Little Nicobar Island is densely wooded, with Mount Deoban rising to a height of 413m on the central part, and the Empress Peak rising to 401m on the NE part of the island.

Little Nicobar Island has been reported to be a good radar target up to 23 miles.

The NW coast between Sombrero Point and Pahua, about 6 miles SW and then about 7.5 miles S to Cape Edinburg, is fringed by a reef which extends up to 0.5 mile offshore.

On 26 December 2004, the coast of the Nicobar Islands was devastated by a 10-15 m high tsunami following the 2004 Indian Ocean earthquake.

7.2nm
167°
Kondul island, high and rocky on its N side, rises to a heigh of 92 m. The shape of this island looks elongated. Kondul was amongst those islands that were devastated by the tsunami of 2004. Population of Kondul Island according to 2001 census is 150. Before tsunami hit this island, ...
1 Dec 11
Jojo 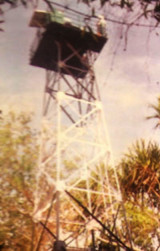 12nm
315°
Miroe Island, low and small, lies 10.5 miles WNW of Sombrero Point, the N extremity of Little Nicobar Island.
Miroe Island has been reported to be a good radar target up to 19 miles.
30 Nov 11
Jojo

45nm
352°
Trinkat Island, which lies between 1.5 and 2.5 miles E of the S part of Camorta Island, is separated from that island to the W and NW by False Bay and Beresford Channel.
Trinkat Island is low, level, and covered by coconut trees. An extensive reef surrounds the island. Morrel Point, ...
30 Nov 11
Jojo