Teressa Island (Tarasa Dwip), roughly crescent-shaped and low in its central part, lies 6.5 miles SE of Chowra Island. The island has a surface area of 101.26 km².

Reefs extend over 1 mile from the N and S ends of the island, but less off the W coast.

On 26 december 2004, the Tsunami has damaged Teressa islandthat has been split into two pieces.

12nm
335°
Chowra Island, which lies about 24 miles SSE of Batti Malv Island, is generally low but rises to a 104.5m high rocky pinnacle at its S end.
The island looks like a hat from the offing. Sanenya, the principal village, lies on the NE coast.
It has area of 8.2 sq km with a population ...
28 Nov 11
Jojo

6nm
106°
Bompoka island lies about 1,8 NM east from southern end of nearby Teressa Island in the Nicobar group of islands. The hills on the island rise upto 193 m. The island has dense forest and some portions have grass growth. There is thick coconut palm growth on shores all round ...
29 Nov 11
Jojo 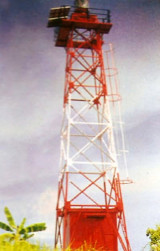 6.9nm
113°
Bompoka lighthouse is on SW point of the island.
Only the locals can approach the landing point safely as there are submerged rocks around.
From the landing point the Lighthouse is about 4 km through forest and hilly track. It is advisable to visit Bompoka island by engaging ...
29 Nov 11
Jojo