In the Key Largo Area are Mosquito Banks, at a short distance from the Pennekamp Coral Reef State Park.

Mosquito Bank overlies a concave low-elevation indentation or reentrant in the bedrock depression beneath Hawk Channel. Sediments in Mosquito Bank are mostly muddy sands with patchy areas of lime mud that surround scattered patch reefs.
Reef area hold tons of fish but is much better fishing in the winter mounths.

To get to Mosquito Bank from Pennekamp and Key Largo sound you just head out what is know as south creek, just look for a short tower to the south, it marks the inland side of the patches. Pretty much even if the wind is howling you will be able to see the patchs. 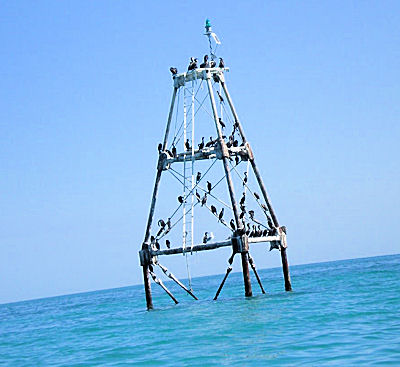 4.4nm
24°
The first underwater park in the U.S., John Pennekamp Coral Reef State
Park encompasses approximately 70 nautical square miles.
It is the coral reefs and their associated marine life that bring most visitors to the park.
Many enjoy the view of the reef from a glass-bottom ...
31 Mar 10
Joëlle

24nm
23°
Elliott Key is the northernmost of the true Florida
Keys (those 'keys' which are ancient coral reefs lifted above the present sea level), and the largest key north of Key
Largo. It is located entirely within Biscayne National Park.
It is bordered by the Atlantic Ocean to ...
18 Apr 10
Joëlle

26nm
237°
Long Key was called Cayo Vivora (Rattlesnake Key) by early Spanish explorers, a reference to the shape of the island, which resembles a snake with its jaws open, rather than to its denizens.
In the early 20th century, Long
Key was the site of a luxurious fishing resort that ...
5 Apr 10
Joëlle

4nm
252°
Rodriguez Key is a nearshore mangrove island surrounded by a shallow mud bank. A branching-coral and coralline-algae zone protects the muddy surface and mangroves of the island.Northern anchorage is possible only when the weather is fair.
31 Mar 10
Joëlle

5.2nm
58°
Key Largo
Dry Rocks lies within the boundaries of the previous Key
Largo National Marine Sanctuary.Key Largo Dry Rocks is located seaward of White Banks and extends to an approximate depth of 30 feet. Dry Rocks SPA covers an area of approximately 0.05nm2, or about 16ha, and ...
1 Apr 10
Joëlle 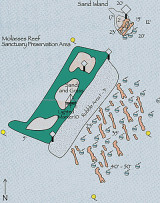 This is arguably the most beautiful collection of reefs in all of
Florida! Rather than a single site, Molasses is an extensive reef complex with diving depths from about 10 feet to more than 70. At depths ranging from 10-40 feet, Molasses Reef features high profile ...
1 Apr 10
bjvlb