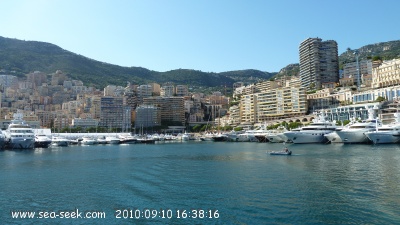 21nm
235°
Cannes bay is located between Pointe de l'Aiguille and Cap de la Croisette, 4 miles ENE, from which the islands "Les Îles de Lerins"  extends up to 2 miles. The E side of the gulf is occupied by the town and port of Cannes well known by it's film festival, where the houses form ...
4 Jul 12
Atx

4.4nm
62°
Mento is a small harbor, lies 2 miles NE of Cap Martin. It is protected by two jetties and is used by fishing boats and yachts. The town stands in an amphitheater which is situated on a small promontory at the NE end of a beach. A square tower stands on the extremity of the promontory, ...
16 Dec 07