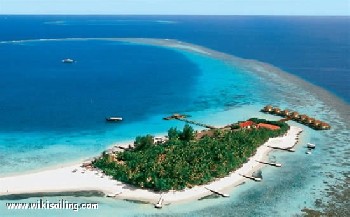 32nm
84°
Funadhoo (Funidu) lies about 0.3 mile N of the E end of Male, and is surrounded by a reef which dries in places.
A small tank farm, with three large and about six smaller tanks,stands on the island.
17 Nov 11
Jojo

28nm
80°
Giraavaru an islet covered in scrub and with a few coconut palms, lies on the SW side of Male Atoll, about 0.5 mile within the outer edge of the barrier reef.
A small bare islet lay at the extremity of the reef extending 1 mile W of Giravaru; a similar islet lies 1 mile S of
Giravaru.
It's ...
19 Nov 11
Jojo

29nm
89°
Located in south male' 12 kilometres from the capital city, the laguna maldives resort a tranquil tropical setting situated among groves of coconut palms floating in the dreamy blue water of its private lagoon.
The lagoon which surrounds the island is ideal for snorkelling, canoeing ...
4 Jan 08

36nm
82°
Hulule, about 0.6 mile E of Funadhoo, bears some tall coconut palms; an airstrip runs the full length of the island and joins it to an islet close S. Airport buildings and a small village lie along the central part of the W side of Hulule.
The Malé International Airport is located ...
17 Nov 11
Jojo

34nm
84°
Malé is the capital of the Republic of Maldives located at the southern edge of North Male' Atoll Kaafu.
Traditionally it was the King's Island from where the ancient Maldive Royal dynasties ruled and where the palace was located. Formerly it was a walled city surrounded by fortifications ...
16 Nov 11
Jojo