A little less than 1 NM to the E of Ventotene island, there is the island of Santo Stefano, the smallest of the archipelago.

This island is occupied by the army. Currently there is a NATO base on the island of Santo Stefano. The NATO base housed an Italian Marine barracks and served as the home port for several US Navy submarine tenders over the years, ending with the departure of the USS Emory S. Land, which set sail for its new home port of Bremerton, Washington. The base closes by spring 2008, ending the US presence there as the US reprioritizes its worldwide presence.

The only authorized anchorage is S of the island, to Cala di Villamarina.

The NW coast is overwhelmed by shoals: a white pyramid shows the dangers of the W island Roma (La Paura); a white buoy tags La Paura shoal and a buoy and a black and white tags shoal Chiesa.
The passage between Chiesa island and the S. Stefano island connects the harbor of S. Stefano with the harbor of La Maddalena. It is 100 m wide and minimum depth is 3.2 m. Its S side is marked by a red beacon and a buoy about 0.2 NM to WNW.
The N side of the passage is marked by the flagship S end of the dam on the Chiesa island and a W buoy.
2013/03/12
Update
Joëlle 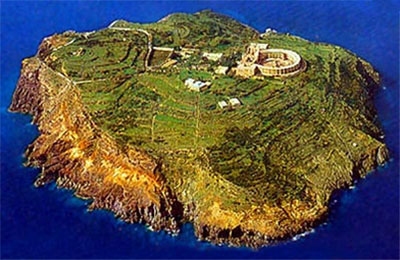 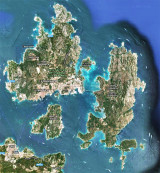 2.2nm
357°
It is the largest island of the archipelago composed of sixty islets and 7 major islands, in the NE end tip of Sardinia. It is mountainous and arid. This is the only inhabited island thoroughly.
It is connected by a bridge to Caprera island where are the house and the tomb of Garibaldi. ...
26 Nov 12
Joëlle 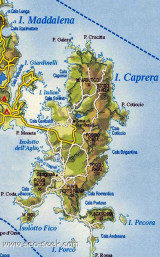 2.4nm
78°
Caprera Island is part of the Archipelago of La Maddalena, belonging to the municipality of La Maddalena, near the north-eastern coast of Sardinia.
Its highest point is Monte Teialone that reaches 212 meters above the surface of the sea and the island, employing an area of ​​15.7 ...
28 Nov 12
Joëlle

4.4nm
154°
Gulf of Arzachena (Arsachena), located between Punta Saline and Tre Monti Cape, is a high inlet whose banks are lined with shoals.
S tip, Arzachena, W of the entrance, a beacon consists of an iron post with a sheer spherical white marks a rock particularly ...
8 Sep 12
Joëlle

34nm
307°
SW of Corsica offers some of the most beautiful anchorages. As you get closer to Bonifacio be carreful with the weather forecast as the NW  wind can be very strong.

The range of the tide in this area is negligible. There are no regular currents along the coasts of Corse, ...
15 May 12
dd