The Gulf of Martaban is entered between Baragua Point and the coast extending N abreast of Kalegauk Island, about 140 miles to the E.
The Sittang River flows into the head of the gulf, about 75 miles N of the entrance. The Rangoon River and the Moulmein River enter the sea on the NW and E sides, respectively, of the gulf.
The entire area of the gulf is shallow and anchorage can be taken anywhere with a suitable draft, but prior to anchoring the direction of the tidal current should be noted and very little chain veered until the vessel stems it. 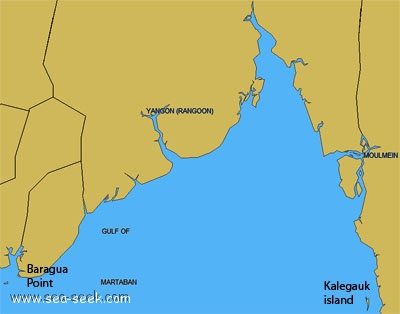 Sites around Gulf of Martaban (Burma)

148nm
259°
Cape Negrais, the seaward extremity of a spur of the Arakan Yoma range, in the Bay of Bengal, is fronted by conspicuous cliffs which rise about 0.8 mile inland to a high summit. The cape has been reported to be a good radar target up to 24 miles.
The coast between Cape Negrais ...
21 Nov 11
Jojo

308nm
142°
Racer Marina is the only fully equipped Marina on the east coast of the Gulf of Thailand. Maintenance service, wet berths, hardstand berths. We also have a 35 tons marine travel lift. Visit our website for more information. www.racer-marina.com
18 Jun 17