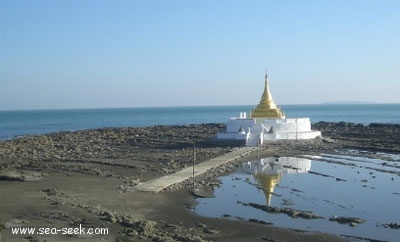 Mawdin Point (Pagoda Point), about 30m high and flat, terminates in a bare bluff.
A pagoda lies on the point and is visible above the trees.
A small 2.7m high obelisk lies on the reef on the SE extremity of Mawdin Point.

6nm
330°
Cape Negrais, the seaward extremity of a spur of the Arakan Yoma range, in the Bay of Bengal, is fronted by conspicuous cliffs which rise about 0.8 mile inland to a high summit. The cape has been reported to be a good radar target up to 24 miles.
The coast between Cape Negrais ...
21 Nov 11
Jojo

455nm
188°
Chowra Island, which lies about 24 miles SSE of Batti Malv Island, is generally low but rises to a 104.5m high rocky pinnacle at its S end.
The island looks like a hat from the offing. Sanenya, the principal village, lies on the NE coast.
It has area of 8.2 sq km with a population ...
28 Nov 11
Jojo

474nm
184°
Trinkat Island, which lies between 1.5 and 2.5 miles E of the S part of Camorta Island, is separated from that island to the W and NW by False Bay and Beresford Channel.
Trinkat Island is low, level, and covered by coconut trees. An extensive reef surrounds the island. Morrel Point, ...
30 Nov 11
Jojo