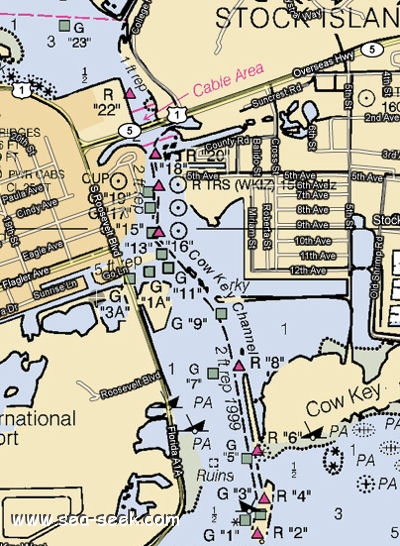 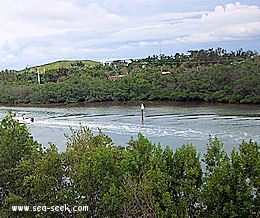 Cow Key Channel, between Stock Island and Key West, is narrow and and marked by private daybeacons.

Caution: A shoal that bares is about 0.2 mile SSW of the SW point of Cow Key.
It was reported that the channel was subject to frequent change. Mariners are advised to seek local knowledge before entering the channel.
Two fixed highway bridges with a least width of 36 feet and clearance of 9 feet cross the channel between the keys.

An overhead cable crosses the channel with a least clearance of 25 feet.

2.9nm
71°
Boca Chica Key is an island in the lower Florida Keys approximately 3 miles east of the island of Key West.
Its name is Spanish for "small mouth", (not "girl mouth" as many assume, since chica used as an adjective in Spanish means small).It is mainly composed of salt marshes (mangroves) ...
15 Apr 10
Joëlle

21nm
270°
The Marquesas Keys (not to be confused with the Marquesas Islands (French Polynesia in the Pacific Ocean) form an uninhabited island group about 30 miles (50 km) west of Key West, 4 miles (6 km) in diameter, and overgrown by mangrove. They are protected as part of the Key ...
8 Apr 12
Cham

0.7nm
40°
Stock Island is an island in the lower Florida Keys immediately east of Key West (separated from Key West by Cow Key Channel, which is only about 75 yards (70 m) wide).Immediately northwest is Key Haven (official name Raccoon Key), from which it is connected by causeway with US 1 ...
19 Mar 10
Joëlle

1.3nm
34°
Key Haven is an unincorporated community on Raccoon Key, an island in the lower Florida Keys about a mile east of the island of Key West. It is a suburb of greater Key West.
19 Mar 10
Joëlle

1.6nm
304°
Sigsbee Park, also known as Dredgers Key, is an island about a half mile north of Key West island. It is connected to the island of Key West by Sigsbee Road. The island and causeway are part of the Key West Naval Air Station. It is primarily used for Navy housing.
It also includes ...
19 Mar 10
Joëlle

2.8nm
292°
Fleming Key is an island off the northwest corner of the island of Key
West, Florida in the lower Florida Keys. It is roughly 2 miles (3.2 km) long by a quarter mile wide.
It is connected to the island of Key West by the Fleming Key Bridge.
The island and bridge ...
19 Mar 10
Joëlle