Cap Cerbere  is formed by steep cliffs which rise abruptly to a plateau. It is the E termination of Chaine des Alberes, a rugged and prominent mountain range. From seaward, the cape has a triangular shape and its summit is surmounted by a small white building. A light is shown from a structure consisting of a grey tower with curved buttresses and a red roof standing on the extremity of the cape. A radio tower is situated close W of the light.
Approaching the coast from the S or E of Cap Cerbere, vessels can readily identify the dark mass of Cabo Creus (42°19'N., 3°18'E.). In addition, the two peaks of Dedos de Cadaques, standing 1.7 miles W of Cabo Creus, may be distinguished.

Anse Cerbere, a small cove, is entered between Cap Cerbere and Cap Canadell, 0.5 mile NW. It offers sheltered anchorage to small vessels from winds from the S through W to N. The holding ground is good, but local knowledge is advised. Two rocks, 2m high, lies close off Cap Canadell with no safe passage in the narrow channel between them and the cape. A village is situated at the head of the cove.

Cap l’Abeille is located 1.2 miles NNW of Cap Peyrefite. The coast between is high, rugged, and fronted by rocks. Tour de la Massane (elevation 808m) and Tour Madeloc (elevation 671m) and illuminated at night, both in ruins, stand on peaks 5.7 miles and 3.5 miles WNW, respectively, of Cap l’Abeille.
Cap Dosne  is located 1 mile WNW of Cap l’Abeille and is surmounted by a prominent yellow building.

Baie de Banyuls lies between Cap Dosne and Ile Grosse, a rock, 0.2 mile ESE. Ile Grosse, 7m high, is joined to the mainland by moles and breakwaters. The bay is divided into two parts by Ile Petite, 3m high. Anse de la Ville, the W part, fronts the town of Banyuls-sur-Mer. Anse de Fontaule, the E part, contains a yacht marina which is protected by breakwaters.
During N or NW winds, anchorage is available, in depths of 5 to 6m, weed, in Anse de la Ville, E of the town. Strong E winds raise a heavy sea. During offshore winds, moderate-size vessels can obtain good anchorage, in a depth of 12m, about 0.3 mile NE of Cap Dosne.

A marine nature reserve, marked by yellow buoys, extends up to 0.8 mile seaward between Cap Peyrefite and Banyuls-sur-Mer. Fishing and dumping are prohibited within this reserve. Vessels are limited to a speed of 5 knots when within 300m of the shore, and to a speed of 8 knots elsewhere within the reserve.
Cap Castell (42°30'N., 3°08'E.) is located 0.5 mile N of Cap Dosne and fronted by a detached perpendicular rock. Cap Oullestrell, a rugged and prominent headland, is located 0.5 mile N of Cap Castell. Anchoring is prohibited within 500m of the NE extremity of this cape.
Anse de Paulilles, a small bay, lies between Cap Oullestrell and Cap Bear, 1 mile NNE. A dynamite factory stands on a sandy beach at the head of this bay. An iron pier, with a depth of 5.5m at the outer end, fronts the factory. The bay offers shelter from N winds, but is exposed to heavy swell. The holding ground is mostly sand, except for Roche La Lioze, a rock, with a depth of 4.7m, which lies in the middle of the bay.

Cap Bear (42°31'N., 3°08'E.), located 5 miles NNW of Cap Cerbere, is the E extremity of a rocky promontory which terminates in a vertical black cliff, 9m high. The rugged terrain rises from this cliff to a height of 56m, about 0.3 mile inland. Fort Bear, an old fortress which is illuminated at night, stands on the summit of the promontory.
9.4 A light is shown from a pink square pyramidal tower with a red top, 27m high, standing 0.2 mile W of the extremity of the cape. A signal station, consisting of a prominent white building, is situated close W of the light.
Numerous wrecks lie within 6 miles of Cap Bear.
Due to the existence of submarine cables, an anchoring and trawling prohibited area, the limits of which are shown on the chart, lies in the vicinity of Cap Bear. The area is 1.5 miles wide and extends up to about 5.5 miles ESE of the cape, and up to 11 miles N of the cape. 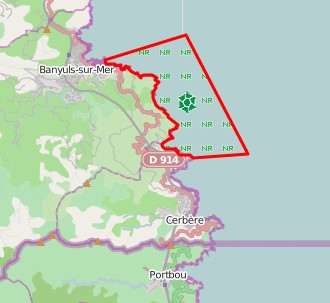