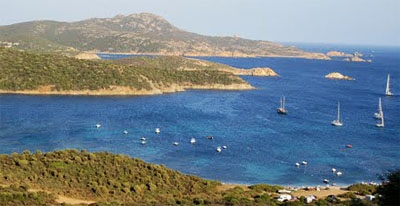 This is the last anchorage in the Gulf of Malfatano just before the cape.
Beautiful anchorage by 11 m. You cannot go furthr to the north of the bay, due to shallow water.
2018/08/13
Update
Joëlle

View from the East to the beach and the restaurant.
2018-08-13
Update
Anonymous

Alternative mooring, in the SW, below the tower of the Capo Malfatano.
2018-08-13
Update
Anonymous
Share your comments or photos on "Cala Malfatano (Malfatano Sardegna)"

Tuarredda islet, facing the beach, can be reached on foot from the latter by low tide.

Care must be taken to shallow areas that occupy a good half of the Gulf. Keep the left when entering the Gulf.
If ...
21 Oct 12
Joëlle

0.4nm
188°
Malfatano cape is a strip of land which is projected into the sea, S of Sardinia.
It closes at the W Gulf Malfatano.

The cape has at its top a round tower whitish.
21 Oct 12
Joëlle

0.4nm
98°
This cove is sheltered in part by Tuarredda island which is separated from the mainland by an isthmus barely submerged.

There is a shelter wich is between the Malfatano Cape tower and the end  S  Tuarredda Island, by 15 m, or in E of the island on the alignment of ...
21 Oct 12
Joëlle

1.1nm
107°
Cala Perda Longa is E Malfatano gulf. It has the same name of the village that overlooks the cove.We can anchor, but you must remain at the entrance of the cove (10 m) because, to the beach, the funds raise quickly.
21 Oct 12
Joëlle

1.3nm
299°
Piscinni tower, built in 1595 on a promontory, stands out both for its size and for its strategic importance, as it was monitoring the approach to the valley and the lake of the same name, used by Peter Port as fish stocks.
In the Spanish era, the tower was strengthened and protected ...
22 Oct 12
Joëlle