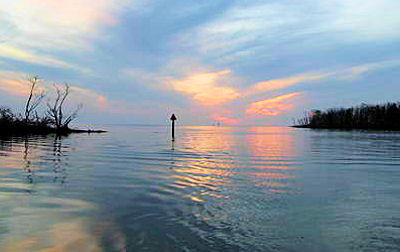 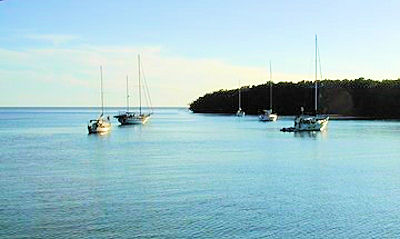 Boot Key Harbor is located  into the everglades, in Florida SW, outside Little Shark River.
The entry is northwest of unlighted daybeacon #4 .
Generally it's a good mooring, with minimum 5,5 feet, when the bay is calm.
Do not swim in the bay because of Alligators. Many mosquitos are in the bay and light colors of clothing are suggested to minimize the attraction to mosquitoes.
2012/04/7
Update
India

2.1nm
22°
Ponce de Leon Bay is a nearly rectangular bight 7 miles N of Northwest Cape.
The N part of the bight is shallow, but fair anchorage is available for vessels drawing up to 6 feet off Shark River Island.
The anchorage is sheltered from winds E of N or S, and the shoal on the NW ...
7 Apr 12
India

37nm
174°
Key Vaca is an island in the middle Florida
Keys, located entirely within the borders of the city of Marathon, Florida. It is often incorrectly identified as
"Marathon Key."Key Vaca is located between Fat
Deer Key and Knight's Key. Key Vaca is also connected via bridge to ...
22 Mar 10
Joëlle

35nm
146°
Long Key was called Cayo Vivora (Rattlesnake Key) by early Spanish explorers, a reference to the shape of the island, which resembles a snake with its jaws open, rather than to its denizens.
In the early 20th century, Long
Key was the site of a luxurious fishing resort that ...
5 Apr 10
Joëlle 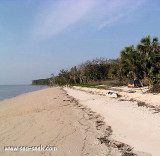 10nm
176°
Cape Sable, is the southernmost point of the US mainland Florida. It is located in southwestern Florida, in Monroe County, and is part of the Everglades National Park. The cape is a peninsula issuing from the southeastern part of the Florida mainland, running west and curving around ...
21 Mar 10
bjvlb

18nm
338°
Seminole point is located 24 miles N from Northwest Cape. It is fairly prominent when standing up the coast at a distance of 2 to 3 miles off.
The point is the SW end of Plover Key, and is the most W land seen until Pavilion Key is picked up to the NW.
7 Apr 12
India

16nm
132°
A marina on the W side of the canal just below the dam at Flamingo has berths with electricity, water, ice, and limited marine supplies.
Gasoline, diesel fuel, and launching ramps are available on either side of the dam. A 5-mph no-wake speed limit is enforced in the canal.The ...
4 Apr 10
Alain