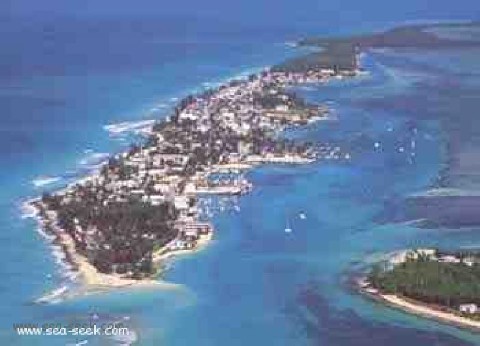 48nm
269°
Key Biscayne is an island located in Miami-Dade County, Florida, United States, between the Atlantic Ocean and Biscayne
Bay. It is the southernmost of the barrier islands along the Atlantic coast of Florida, and lies south of Miami Beach and southeast of Miami. The Key is connected ...
18 Apr 12
JB

52nm
252°
Elliott Key is the northernmost of the true Florida
Keys (those 'keys' which are ancient coral reefs lifted above the present sea level), and the largest key north of Key
Largo. It is located entirely within Biscayne National Park.
It is bordered by the Atlantic Ocean to ...
18 Apr 10
Joëlle

47nm
279°
Miami Beach occupies the barrier beach that separates the ocean from the upper part of Biscayne Bay and is also an important yachting center. A number of causeways, with bridges over the channels, form good highway connections with Miami and the mainland communities.
The city is ...
8 Apr 10
Joëlle

47nm
271°
Crandon
Park Marina is on Key Biscayne lies on the eastern coast of Florida in the south of the USA. It is a Dade County Municipal Marina and lies in the 900 acre Crandon Park. The facility combines slips & moorings.
Crandon Park Marina lies on the northern end of Key Biscayne, ...
18 Apr 12
JB

47nm
273°
Norris Cut is a shallow inlet just south of the Main Channel to Miami Harbor between Fisher Island and
Virginia Key. A prominent stack and tanks are near the center of Virginia Key.
5 Apr 10
soja