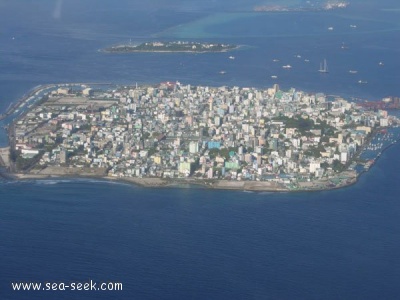 Malé is the capital of the Republic of Maldives located at the southern edge of North Male' Atoll Kaafu.
Traditionally it was the King's Island from where the ancient Maldive Royal dynasties ruled and where the palace was located. Formerly it was a walled city surrounded by fortifications and gates (doroshi). The Royal Palace (Gan'duvaru) was destroyed along with the picturesque forts (kotte) and bastions (buruzu), when the city was remodelled under President Ibrahim Nasir's rule after the abolition of the monarchy.

A commercial harbour is located in the Island. It is the heart of all commercial activities in the country. Many government buildings and agencies are located on the waterfront.
Malé International Airport is on adjacent Hulhule Island which includes a seaplane base for internal transportation.
Several land reclamation projects have expanded the harbour.

From the few observations made in the vicinity of Male, it seems likely that the water movement there is far more influenced by the monsoon currents than the tidal currents.
When the currents are flowing strongly, it seems likely that the tidal currents are only strong enough to increase or decrease the resulting flow and rarely strong enough to reverse its direction. Due to the probability of strong and unpredictable currents, an approach by night is not recommended.

In the channel E of Male, the currents from Vaadhoo Kandu (Wadu Channel) set across. During the Northeast Monsoon, a component of the current sets NW through this channel, setting a vessel towards the reef fringing the E side of Male. The flow turns W between Male and Funadoo.
It is reported that this flow commenced 1.5 hours before HW, and ran until 1.5 hours before LW, attaining a maximum velocity of 2.5 to 3 knots at about HW N of Male breakwater, where it sets strongly across the N face of the breakwater. At the same time the flow was weak and variable E of Funadhoo. Strong sets have also been reported during the Northeast Monsoon in Male Harbor.
During the Southwest Monsoon, a component of the current enters the lagoon through the channel S of Giravaru, flowing out principally through the channel W of Male and between Male and Funadhoo, and then S into Vaadhoo Kandu (Wadu Channel) .

It was reported (1972) that an E set existed until within the line joining Male and Hulule, then slack water between Funadhoo and Dunidu, when a strong E set was experienced to the anchorage. Four hours after LW, with the flood current tending to oppose the current, a moderate NE flow was experienced in the lagoon.

No observations have been made during the change in the monsoons when the currents could be weak and variable at times, but trong sets may always be encountered.

Male is identified from N and NE by a white mosque and minaret, and radio masts at its SE corner.
The E, S, and W coasts of Male are fringed by an unbroken reef, awash, extending from 23m to 0.2 mile from the S coast.
The N side of the island is protected by a breakwater, about 1.2m high and 4m wide, which is connected to the land at each end.
Six passages lead through the breakwater into the harbor, with another into a shallow pool at the W end. Lights are shown from beacons, painted in black and white bands, lying on each side of each of the passages passages.

1.7nm
262°
Funadhoo (Funidu) lies about 0.3 mile N of the E end of Male, and is surrounded by a reef which dries in places.
A small tank farm, with three large and about six smaller tanks,stands on the island.
17 Nov 11
Jojo

2.1nm
49°
Hulule, about 0.6 mile E of Funadhoo, bears some tall coconut palms; an airstrip runs the full length of the island and joins it to an islet close S. Airport buildings and a small village lie along the central part of the W side of Hulule.
The Malé International Airport is located ...
17 Nov 11
Jojo

0.6nm
234°
South West Harbor is protected by a rough breakwater of heaped coral extending 0.15 mile from the SW extremity of Male.
The harbor is used by inter-island trading boats, cargo lighters, and deep-draft vessels at anchor.
The Custom House lies on the main quay facing the main ...
13 Nov 11
Jojo