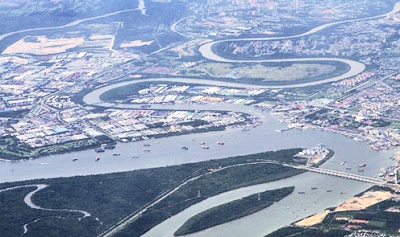 Port Klang is the principal port in Selangor.  It also serves as the port for the Klang Valley, Malaysia's most developed region where the capital Kuala Lumpur (that lies 40 miles to the E) is located. The port is situated on the W coast of the Malaysian Peninsula at the N end of the Strait of Malacca.

It is well sheltered by surrounding islands and forms a natural enclosure.

Port Klang actually consists of three distinct ports.
The port nearest to Port Klang town is known as the South Port.
There is also a North Port and the newly developed Westport located on an island just off the coast of Port Klang.
South Port is the oldest port and was previously administed by the Malayan Railway Administration. The reason it was administered by the MRA is that the railway line from Kuala Lumpur literally terminated at the South Port. Today, South Port is more quiet than the other two ports. Some bulk cargo, ferries and small boats depart from South Port but activity has shifted, to a large extent, elsewhere.

North Port can be considered the largest port in Port Klang. It is managed by Northport Corporation Berhad and is the largest container port serving Malaysia. Most of Malaysia's imports and exports are handled through Northport. North Port is located about 40 km from Kuala Lumpur and costs incurred by importers and exporters are usually lower than that of West Port.

Port Klang has a long way to go before becoming a port city as it requires extensive development of facilities and attractions which involve huge costs.

Winds—Weather.—Fog is rare although haze is present in the Strait of Malacca from March through August.
Visibility is reduced in dense rains, the heaviest of which occur in October and November. Severe weather at Port Kelang is rare and both the south and N ports are protected by the natural configuration of land.
The tidal currents run with considerable strength, but were found not to exceed, as a general rule, 3 knots, the maximum velocity being attained about 2 hours before HW and LW. They generally set parallel to the shore in both straits.
Care must be taken when passing the various creeks and channels. This is especially important when off Pulau Che Mat Zin.
Off the S extremity of Pulau Pintu Gedong, at springs and neaps, the N currents begin 2 hours 30 minutes after HW at Port Kelang (South Port); at springs this S current starts 3 hours before, and at neaps 3 hours 30 minutes before HW at Port Kelang (South Port). There is a period of slack water for 45 minutes at springs and 1 hour at neaps.
Off Pulau Angsa at springs the N current commences 1 hour 45 minutes after and at neaps 1 hour 15 minutes after HW at Pulau Angsa; at springs the S current starts 5 hours 15 minutes before and at neaps 4 hours 45 minutes before HW at Pulau Angsa. There is a period of slack water for about 1 hour at springs and about 1 hour 30 minutes at neaps.
At Port Kelang (South Port) the tidal currents attain a velocity of from 2.5 to 3 knots at springs, the E and S current being stronger than the W and N current. They attain their maximum velocity about 2 hours before HW and LW by the shore.
Tides—Currents.—The direction of the tidal current at the wharves at Port Kelang (South Port) is denoted by a white ball at the signal station, at the S yardarm for the flood current, at the N yardarm for the ebb current, and in the center for slack water. The current at the buoys where the ocean-going vessels lie, changes a little later, and captains of vessels when going alongside the wharves should be guided by the signals.
There are entry restrictions for vessels calling on South Port.
Dry cargo vessels cannot exceed 183m in length and tank vessels 170m in length. The maximum draft allowable for these vessels is 9.8m.
Tidal conditions govern movements of all vessels that are over 91m long. At the N extension wharves, container ships up to 289m long can berth.
Depths—Limitations.—Entry into Port Kelang is via a N approach channel and a S approach channel. The N channel is dredged to 11.1m over a maximum width of 152m. The S channel is dredged to a depth of 15m over a maximum width of 366m. Both channels and the fairways leading to North Port and South Port are well marked by navigational aids.

Pilotage.—Pilotage is compulsory for all vessels 28m long and over, except government and fishing vessels, vessels offered an exemption by the Port Authority, or those vessels conducting harbor services. Service is available 24 hours. The vessel’s ETA should be sent 7 days in advance.

Regulations.—The following regulations are in effect within the limits of Port Kelang:
1. No vessel or small craft shall anchor in the fairway of the mouth of the Sungai Kelang.
2. All vessels equipped with VHF radio are required to maintain a continuous listening watch on VHF channel 12 when navigating or at anchor within the harbor.
3. No vessel shall move at an excessive speed within port limits. Every vessel shall, when approaching or passing any other vessel, reduce speed in sufficient time to prevent her wash or low wave from causing any danger, damage or inconvenience.
4. No vessel shall proceed to or depart from any wharf or buoy owned by the Government or Port Authority unless a licensed pilot is aboard.
5. The master of a vessel of less than 75 tons may, on application to the Harbormaster, be granted an exception to this regulation.
6. When two vessels are approaching the port, the one by Selat Kelang Utara, and the other by Selat Kelang Selatan, so that both may arrive off Tanjong Gila  at the same time, the vessel stemming the tide shall give way to the vessel with the following tide and allow it to enter Port Kelang (South Port) first.
Vessel Traffic Service.—A Vessel Traffic Management System (VTMS) is in effect within the N and S approach channels and extends out to the entire pilotage district. This VTMS utilizes radar and cummunication facilities for support and is part of the greater Malacca Straits Surveillance System (MSSS). 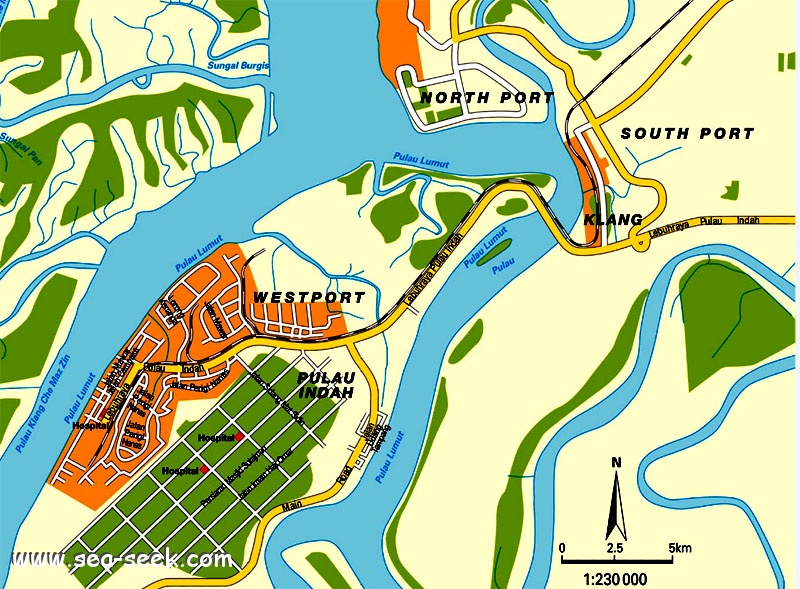 35nm
161°
Pyramid Shoal, which lies on the N side of the SE end of South Sands, has a least depth of 3.4m, hard sand, and is the most dangerous shoal in the area because of its depth and protrusion into the fairway.
A lighted buoy is moored about 7 miles SE of Pyramid Shoal. A depth of about ...
28 Dec 11
Jojo

11nm
172°
Kampong Morib, which is conspicuous, stands 3.75 miles SSE of the entrance of Kuala Langat. Kuala Langat is famous for its agricultural produce, industries that recycle scrap metal, home stay programmes for tourists and for its National Space Centre in Kanchong Darat.
Fishermen's ...
29 Dec 11
Jojo

9.2nm
218°
Selat Lumut separates the E side of Pulau Lumut from the mainland. It has a least width of about 0.1 mile, with both sides of the S entrance fringed by mud banks. Selat Lumut has not been surveyed in detail, but appears to be navigable by vessels of not more than 3m draft.
From ...
28 Dec 11
Jojo

10nm
209°
Tg Ru is located E side of the approach to Selat Kelang, on Pulau Carey, It is the S point of the South fairway of port Klang .
The coast between Tanjong Ru and Tanjong Gabang, about 15 miles SE, is indented about midway along its length by Kuala Langat. This shallow river is not ...
29 Dec 11
Jojo

19nm
163°
Tg Gabang has a light easily identified. It is located before Kampong Batu Laut that stands at the mouth of a small river about 2 NM SE of the point.Between Tanjong Gabang and the entrance of the Sungai Sepang Besar, about 16 miles ESE, the thickly wooded coast is fringed by a sand ...
29 Dec 11
Jojo