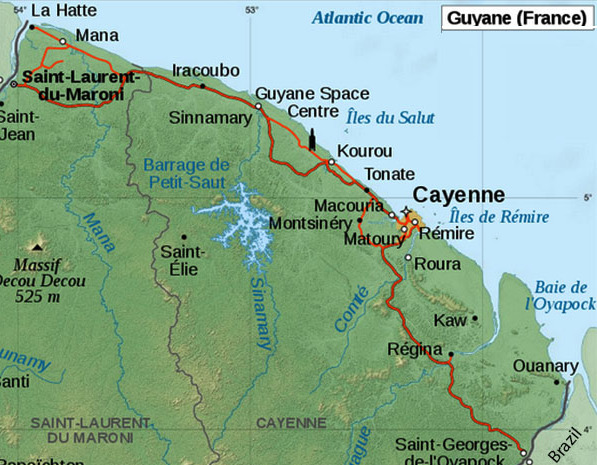 The coastal bank extends a considerable distance offshore. The coastal bank lies as far as 21 miles offshore. Vessels should proceed with caution as the coastal reef has been reported to extend from 1 to 9 miles farther offshore than charted.
On the north Atlantic coast of South America, It borders Brazil to the east and south, and Suriname to the west.
The coastal bank extends up to 25 miles offshore. There are no sheltered harbors for large ships. Ships of limited draft can proceed to Georgetown on the Demerara River and to New Amsterdam on the Berbice River, but must cross the bars of these rivers and engage pilots.
The capital Georgetown is a dirty, bustling port with no facilities for yachts. On the right bank of the river Demerara, the town has nineteenth century houses on stilts and boulevards built along disused Dutch canals. Seawalls and dykes protect the town, which is built on an alluvial flat area below the highwater mark. If electing to anchor in the Demerara River the yacht should not be left unattended.

As in many South American countries, armed robbery and violent crime does occur. The UK Foreign Office recommend exercising caution when travelling in Guyana, however most visits are trouble-free. The local authorities have been working hard over the last few years to improve the security situation for visiting yachts and are keen to develop yachting tourism.
Georgetown is notorious for petty street crime. Do not walk alone at night, or even during the day.

The climate is hot and humid, especially from August to October. The wet seasons are from April to August, and November to January. Guyana lies outside of the hurricane belt.
Tradewinds exist in the area practically all year. From January to April winds are predominately out of the northeast; from April to December east and southeast. The north equatorial current, with speeds between one and three knots, has maximum effect between 60 and 100 miles offshore. The tidal current, with a speed of around one-and-a-half knots, runs along the coast and is stronger in front of the river mouths.

Formalities on arrival are straightforward and free of charge. The official port of entry is Degrad de Cannes (4°51'N, 52°16'W) in the river Mahury. It is also possible to register with the authorities in Kourou. Valid passports and ship's papers are required.
2016/01/21
Actualizar
Joëlle
Comparta sus comentarios o fotos en "Guyane - French Guiana"

26nm
63°
Îles du Salut, 3 in number, are  located about 7 NM NE of Pointe Charlote.Ile du Diable, the northernmost, is 40m high. Ile Royale, 66m high, is the largest and westernmost, while Ile Saint-Joseph, only 30m high, is the southernmost.

26nm
64°
Anchorage can be taken in the bight formed by the S side of Ile Royale and the W side of Ile Saint-Joseph.
20 Jan 16
Joëlle

27nm
63°
Île du Diable part of Salut islands is better known as Devil's Island. The total area is 0.62 km2 (62 hectares) The islands were used as a penal colony from 1852 onwards, earning them a reputation for harshness and brutality. This system was gradually phased out and has been completely ...
20 Jan 16
Joëlle

68nm
304°
Pointe des Hattes marks the N limit of the French Guiana and the separation with Suriname country.
20 Jan 16
Joëlle