The bay of All Saints (Baia de Todos os Santos in Portuguese), also known as "All Saints'Bay" and "Todos os Santos Bay", is the principal bay of the Brazilian state of Bahia, on the eastern coast of Brazil, surrounding part of Bahia's capital Salvador and opening to the Atlantic Ocean.. It is the largest bay in Brazil which offers a multitude of marinas and anchorages.

Cruisers are warned not to visit secluded anchorages in the Bahia de Todos os Santos. It is also strongly recommended that, unless taking up a berth in one of the marinas, vessels should avoid anchoring in the Port area where several armed boardings and robberies have taken place.

Checking in with the Policia Federal is mandatory here.
The staff at both marinas are most helpful and will advise about formalities

The approach is straight forward and deep, but with surprisingly strong currents in the middle of the bay and also at the northern end. The night approaches are well marked to all the marinas. Beware of wrecks off the cape on the eastern side of the entrance to the bay.

There are a number of yacht clubs in and around Salvador, and repair facilities at some of them are very good as they cater for a large local boating community.
Aratu Iate Clube Rodovia Paripe – CIA, , S/N, Simoes Filho Tel:+55 071 32167444 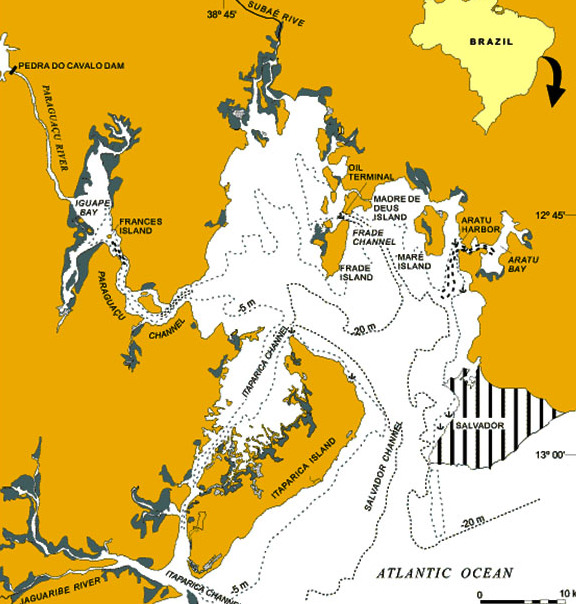 10nm
108°
A friendly marina in the sheltered Itapajipe bay, N of Salvador city. All facilities, laundry, WiFi, chandlery, restaurant, small shop. Nearby bus into the city. Owner speaks English and French and is most helpful. A good place to leave the boat. At LW 1.4m in the approach channel.

12nm
77°
Towards the bottom of the Bay of All Saints, to starboard, there is a marked channel that leads to the bay of Aratu.
It is from there that share the most contributes regatta Bahia, the place of arrival is Maragogipe, in August, in honor of Saint Bartholomew, the saint patron ...
15 Jan 16
Joëlle