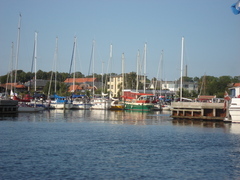 9.2nm
104°
Moen Lighthouse
With a growing traffic in the middle of the 1800s increased the need for demarcation of the Danish coasts. In 1845 the lighthouse was the maid garnish turned south and followed a few years after the lighthouse on Dasser Ort in Mecklenburg coast. The 13 meter high ...
15 Dec 09
holger

19nm
18°
Stevns LighthouseThe first lighthouse at Stevns was built in 1818 by Poul Løvenørn the end of the lighthouse's building inspector who was on top of Stevns Klint. It was not a tower, but merely an extension. In 1878 entered this a new 27 meter high lighthouse. The lighthouse ...
15 Dec 09
holger

27nm
203°
Gedser Lighthouse
Started in 1802 as a tower with closed coal lighthouse which in 1834 changed to mirror apparatus. Tower increased in 1851 and fitted with fixed lens apparatus. In 1905 the tower was elevated again and the lens unit was exchanged for a rotary, bear glødenetsbrænder ...
15 Dec 09
holger

40nm
350°
The harbour is situated at the bottom of Roskilde FjordThere are plenty of activities at the marina and the adjacent museum of Viking boats and its harbour
The harbour provides the following facilities: Diesel supply, slip-way, crane, rigging-sheers, BBQ area, playground, ...
15 Jul 11
Agien