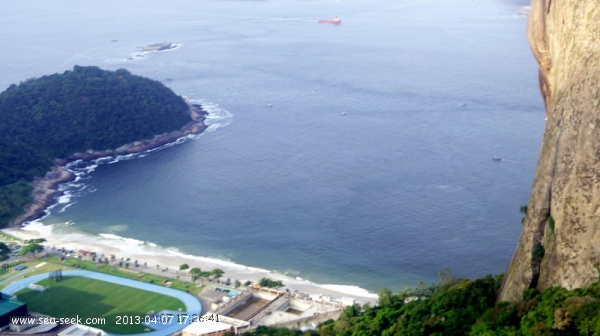 5.8nm
205°
Ilhas Cagarras, about 3 miles N of Ilha Redonda, consists of seven islets. Ilha Comprida is the largest of the group. Ilha de Palmas shows a light.
Sunken rocks extend 183m S of the E end of Ilha de Palmas. Ilha do Pai and Ilha da Mae lie on the NE side of the approach to Baia ...
16 Jan 16
Joëlle

0.3nm
291°
Urca Beach is a small, narrow beach 100 meters long, located at the foot of the hill of Urca; It is also the main beach of Urca in Rio de Janeiro, frequented by neighborhood residents.

The water is totally calm but has a dark tone because of pollution and it is considered unfit for swimming.
17 Jan 16
Joëlle

1nm
245°
The Iate Clube do Rio de Janeiro is headquartered in the city of Rio de Janeiro, capital of the state of Rio de Janeiro (Southeast Region of Brazil) and will host the 2016 Olympic and Paralympic Games.
The club offers complete training structure for sailing and is located at Enseada ...
17 Jan 16
Joëlle

1.1nm
70°
The entrance of the Guanabara bay lies between Ponta de Santa Cruz, about 6 miles WNW of Ponta de Itaipu and Ponta de Sao Joao, about 0.9 mile to the W.
17 Jan 16
Joëlle