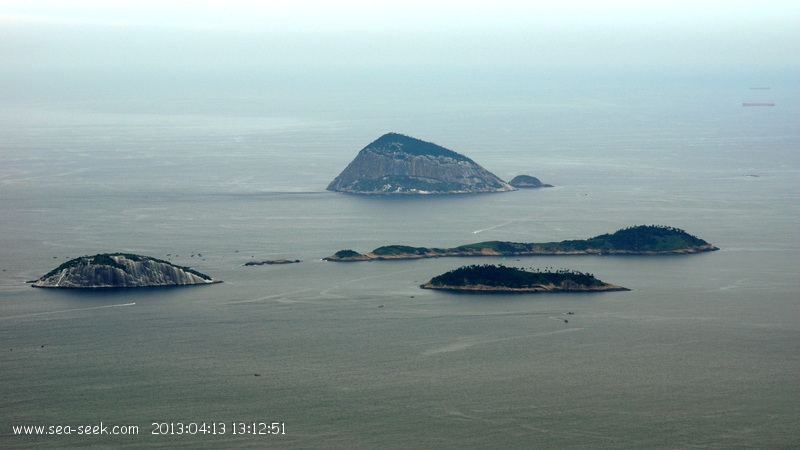 Ilhas Cagarras, about 3 miles N of Ilha Redonda, consists of seven islets. Ilha Comprida is the largest of the group. Ilha de Palmas shows a light.
Sunken rocks extend 183m S of the E end of Ilha de Palmas. Ilha do Pai and Ilha da Mae lie on the NE side of the approach to Baia de Guanabara, close W of Ponta de Itaipu. A shoal patch, with a depth of 20m, lies 0.2 mile S of Ilha do Pai.

Vessels approaching the entrance to Baia de Guanabara should keep a sharp lookout for small craft and fishing vessels.
2016/01/16
Update
Joëlle
Share your comments or photos on "Ilhas Cagarras"

5.8nm
265°
Ilhas Tijucas is an island in Rio de Janeiro, Brazil, situated between Ilha Alfavaca and Ilha do Meio, and nearby to Ilha Pontuda. Ilhas Tijucas, consisting of three islets and several rocks whose least known depth is 2m, and are located about 1 mile S and SE of Cabo da Gavea.

3.9nm
18°
Beautiful beach located between Ponta de Copacabana and Ponta de Leme.Anchorage is possible but it is often subject at swell.
16 Apr 15

15nm
86°
The archipelago of Maricas is located about 13 MN WSW of Ponta Negra and near the entrance to Guanabara Baia.
A fire is on the island N.
17 Jan 16
Joëlle

4.4nm
294°
Beach for surfers on its western part and landing of hang gliders and paragliders area.
16 Jan 16
Joëlle

5.1nm
17°
The Iate Clube do Rio de Janeiro is headquartered in the city of Rio de Janeiro, capital of the state of Rio de Janeiro (Southeast Region of Brazil) and will host the 2016 Olympic and Paralympic Games.
The club offers complete training structure for sailing and is located at Enseada ...
17 Jan 16
Joëlle