The small island Skarda, that is a part of the archipelago of Zadar, is located northwest of the island of Ist and SE O. Premuda.
The small village is located on the N side with an exposed anchorage.
The best anchorage is located SE of the island at Uvala Griparica, depending on winds. It is a ruined castle at the bottom of the bay. Moorings for visitors.
2011/07/26
Update
Jojo 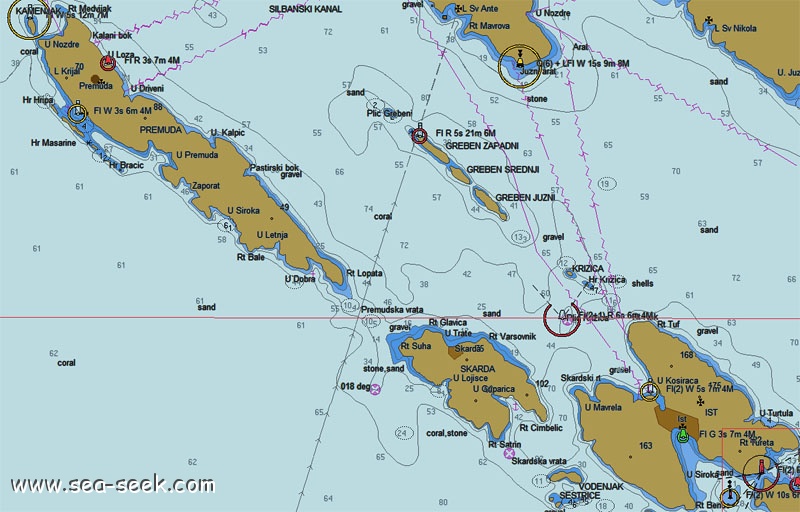 6.5nm
12°
Olipski Kanal leads NNW between the E side of Otok Silba and the W side of Otok Olib and merges into the N end of Pohlipski Kanal.
This channel is deep and has a minimum navigable width of 0.7 mile. It is often used by vessels proceeding to and from Zadar.
Good anchorage is ...
18 Sep 11
Jojo

6.9nm
27°
Otok Olib is located E of O. Silba. It belongs to Zadar archipelago.The island has been inhabited since Roman times. The residents bought their island in 1900. The only village on the island was established around the port.
To the east of the island you will find some small hidden ...
27 Jul 11
Jojo

4.7nm
310°
Premuda is located northwest of Otok Skarda which it is separated by a channel about 0.9 m wide (Premuda Vrata). The tips of each side of the channel are overwhelmed shoals and should not be approached too closely.
The coast is home to 2 W moorings and a small port and there is ...
17 Sep 11
Jojo

5.9nm
354°
Silba is a small island, 8 km long where  there are no vehicles and no hotels. Inhabited since Roman times, the Latin "silva" (forest) which gave its name to the island is covered with trees.On the island there are shops, restaurants and taverns, caffe bars, post office, ...
27 Jul 11
Jojo

17nm
81°
Kanal Nove Povljane, entered between Otok Vir and the SE end of Otok Pag, leads 5 miles SE into Ninski Zaliv.
Shoals at the inner end of this channel restrict the fairway to a width of about 250m, with a controlling depth of 8m. Vessels with a draft of over 6m are advised not to ...
23 Jul 11
Jojo

14nm
119°
Rivanjski Kanal continues NW from the N end of Srednji Kanal and leads between Otok Rivanj andOtok Sestrunj.
It is generally used by vessels proceeding between Srednji and Zadarski Kanals.
Otocic Tri Sestrice, a group of islets and rocks, extend up to 2 miles NW of Rt Zanavin, ...
9 Sep 11
Jojo